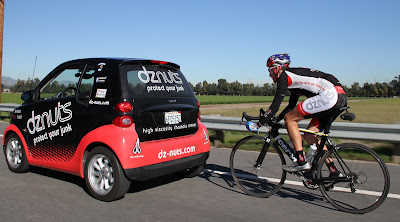 A few months ago I was doing a ride from Win’s Wheels here in Westlake Village. It was a celebration of sorts, to send Brett (a Win’s employee) off to college and the start of his bicycle racing career. Well we had a nice large group for our ride and we rolled out easy but soon enough we were going up the famous Rock Store climb. I can’t remember who it was trying to race me to the top but I was keeping him close just for kicks. Suddenly we were coming up on two riders when the fellow racing me said to them, “look who’s coming up behind you.” Now these two guys were totally decked out in DZ-Nuts clothing and my competitor on the climb used this to his advantage. I gladly slowed down to talk to these super die hard DZ-Nuts fans. They were brothers and they called themselves the DZNUTSCREW. We all re-grouped at the top, chatted and took some pics together before the ride continued down to the coast. It was a great moment for me and a great day on the bike.

Weeks later, I reconnected with the DZNUTSCREW off the bike. We carved some pumpkins on Halloween with our kids and one of the brother’s showed me his SMART car. He told me how long his commute was day in and day out on one of the world’s busiest freeways. Turns out he’s a dedicated High School teacher with a major commute. He had an idea that we should wrap the SMART car in DZ-Nuts logos for some rolling advertising during his drive to and from school. After some discussion with the DZ-Nuts management team we got the car wrapped and the end result sure is SWEET.

The DZNUTSCREW showed up at my place to take some photos of the new Nutmobile. I couldn’t help myself but to get on top of that car with my bike. After a few publicity photos that the neighbors seemed to be enjoying, we headed out on the road together for a training ride. And it was a really good training ride indeed. Turns out the DZNUTSCREW is a great motorpacer and we got a ton of pics for the web site. It was such a nice sunny winter day and riding behind that car all logoed out just made the legs roll over with good sensations.

For more stories by DZ please click on the title link.
Posted by Recovox at 1:12 PM

Want To Increase Your ClickBank Traffic And Commissions?