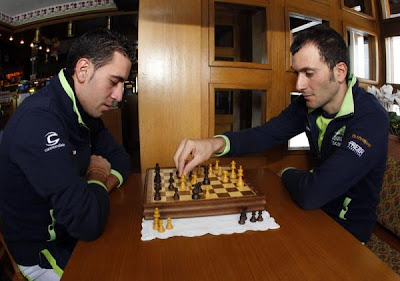 Liquigas-Cannondale will close their first official team gathering for the 2011 season at the Dolomite ski resort at Moena, Italy on the Passo San Pellegrino on Thursday afternoon.

The Italian team met for their now-traditional four-day winter camp this week to train and plan for the news season. It is the third year the ProTeam squad have used the unique environment to build team spirit, with heavy snow seeing the riders such as Ivan Basso and Vincenzo Nibali swap their road tyres for snowshoes and toboggans.

It was also a chance for the riders to get to know one another after a number of roster changes during the past several months. Daniele Bennati, Roman Kreuziger and Francesco Chicci have moved on, but the the team have welcomed a host of new riders, including US riders Ted King and Timothy Duggan, Australia's Cameron Wurf and Germany's Dominik Nerz.

Liquigas finished second behind Team Saxo Bank in the International Cycling Union's (UCI) 2010 team rankings thanks mainly to Basso and Nibali's respective Giro and Vuelta a España triumphs. Last week the UCI confirmed it had renewed the team's ProTeam licence for a further three seasons. The team will outline on Thursday the riders' rosters, however team boss Robert Amadio left no doubt about the big targets for the team next year.

Basso, 33, said last week that he plans to skip the 2011 Giro, which he won overall for the second time in his career this year, in favour of targeting the Tour de France. Conversely, Nibali is expected to focus on his second Grand Tour victory at the Giro. The 26-year-old finished third overall at this year's edition of the race before becoming the first Italian since Marco Giovannetti in 1990 to claim the overall title at the Vuelta.

While the team proved its Grand Tour credentials this year, it also had a strong presence throughout the 2010 Spring Classics season. The squad will look to Slovakia's Peter Sagan, 20, and Italy's Daniel Oss, 23, to spearhead its challenge next Spring.

Sagan told Gazzetta, "the dream is San Remo", while Oss, who finished fifth at Gent-Wevelgem in March, is "pointing at Flanders."

Liquigas will follow the Moena camp with a longer and more traditional training camp on the Italian island of Sardinia from December 9-22. The team will commence the new season at the first UCI World Calendar event of 2011, the Tour Down Under, in Australia on January 16.
Posted by Recovox at 10:50 AM