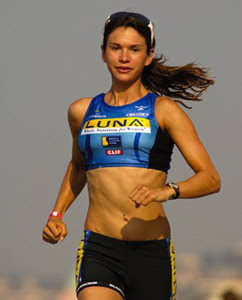 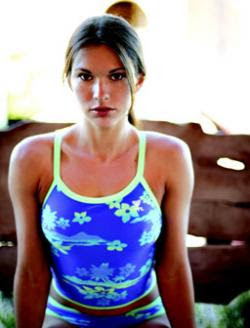 The first sign that Katya Meyers will be a pleasure to deal with is when she selects the time to meet for an interview. Models typically don’t do 8:30 a.m. There’s beauty rest, primping, another hour to select the outfit. Models usually say noon, then keep you waiting 45 minutes.

Meyers shows up on time. (OK, five minutes late, which is prompt by San Diego standards.) She’s casually dressed in jeans and a spaghetti-strapped top. Her hair’s damp. Modeling pays the rent, but triathlon represents Meyers’ passion. The hair’s damp because she quickly showered following 70 minutes on the trainer and a 20-minute jog. Since Meyers has been fighting fatigue for months, this represents a casual workout.

Triathlon, by definition, requires a juggling act. Meyers’ lifestyle fits accordingly. There are 12-hour photo shoots, the swim/bike/run thing, plus her future goal - becoming a doctor. Meyers, 27, recently took her Medical College Admission Test and was pleased with her results. But med school can wait. Meyers doesn’t want to turn 50 and wonder how good she might have been. So she plans to push the tri thing a couple more years before moving on to medicine.

After a dominating amateur triathlon career, Meyers has seen modest results as a pro. A fourth last year at Ironman France, a ninth at Canada in 2005, an 11th this year at Australia represent the highlights.

“I want to keep trying to put it together,” Meyers says, “racing as long as it’s a viable option.”

With Meyers’ Eastern European look and lyrical first name, strangers might view her as mysterious, even exotic. Instead, she’s down home and shy, blended with equal parts beauty, brains (Stanford educated) and athleticism. (Meyers’ mother modeled through medical school and named her first daughter after another dancer.)

But forget exotic. She grew up in rural Kentucky and Illinois and was named Miss Tobacco Queen in Russellville, Ky. Her father owns farmland in three states, raising cows and horses.

Gymnastics represented Meyers’ sport of choice in her youth. At Stanford, she rowed until sampling triathlon as a junior. Her first race proved memorable.

Forgetting her helmet, Meyers’ first transition wasn’t the best either. She crossed the finish line second, then was DQ’d for the helmet miscue. Still, she was hooked.

“It was just the rawness of it,” she says.

Within a year after graduating from college, Meyers won her age group at Ironman Coeur d’Alene. It was Triathlete magazine publisher John Duke who suggested that Meyers turn pro.

“If she turned pro, she’d be able to travel the world,” said Duke, one of the sport’s most influential individuals and Meyers’ good friend. “If she’d have stayed an age-grouper, she’d have collected awards that go in a box and would forget about ‘em when she becomes a doctor.”

It was also Duke who jump-started Meyers’ modeling career, recommending her to a photographer.

Interestingly, Meyers admits she’s shy, yet she’s comfortable in front of the camera.

“I just sort of disengage and have fun,” she says. “A lot of times pictures turn out better when you’re just natural, not forcing things. I kind of pretend the camera’s not there.”

Meyers has been signed to a modeling agency for eight months. She has appeared in two Triathlete swimsuit issues and numerous covers in fitness related magazines.

Meyers projects a healthy lifestyle beyond triathlon and her modeling work. Wanting to steer children to healthier lives, she often speaks to elementary school students.

There may be those who feel Meyers receives more publicity than her results merit which, when analyzed, makes no sense. Suppose Meyers moonlighted as a mortgage broker instead of as a model? No one would complain about her source of income. But because she models and some of her work appears in Triathlete, people get chippy.

“If other people are jealous about that, that’s their own fault,” says 15-time Ironman champion Heather Fuhr. “That’s part of being a professional athlete, being the whole package. You go with what you got. She’s a beautiful girl. She might as well use that.”

As for Meyers wanting to become a doctor, there’s significant family influence there. Her mother, Lucy, is a practicing pediatrician. Her father, Robert, is a former orthopedic surgeon. As a child, Meyers often made rounds with her father and observed surgeries.

“I like the idea of having a tangible skill you can use to help people,” Meyers says.

There is nothing phony about the woman. As the scrapes on her shins and forearms attest, Meyers has eaten pavement more than once falling off the bike. During photo shoots, she sometimes asks assistants if they want to apply makeup to her bruises and abrasions.

“That’s who you are,” photographers tell her. “That’s cool.”

No one questions her toughness. Meyers won a local half marathon last year 10 days after breaking her shoulder in a bike crash. She ran with her left arm immobilized, clinging to her sport bra.

Duke is the first to admit Meyers likely would fare better as a triathlete if she focused solely on the sport.

Besides, Meyers likes her place in life.

“I do,” she says. “I don’t think this is my final destination. My friends say, 'You have so many plates spinning.’ But I like having interests, focusing on more than one area at a time.”
Posted by Recovox at 10:47 AM