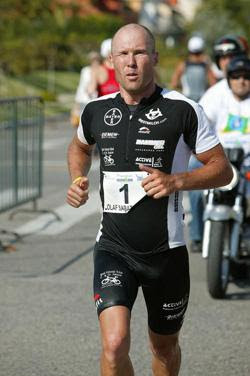 What was originally billed and hyped as Olaf Sabatschus’s attempt to secure his third championship tile at the 2007 edition of Telecom Ironman Brazil has now changed to “a come back race” the resident of Trosdorf, Germany, professed yesterday.

Late last fall the two-time winner of Ironman Brazil Olaf was delivered a message by his doctor, the kind that floors you. “Olaf, you have cancer,” the doctor informed him. Testicular cancer, to be specific, the mild mannered veteran revealed casually yesterday when asked how his Ironman Brazil preparation had gone. Sabtschus’s frankness about this period of his life left one to think of the similarities of how another well-known athlete dealt with the same diagnosis. However, Sabatschus went about his treatment and recovery in relative privacy. No announcement, press release, not a word.

Like many think immediately after being diagnosed with cancer, his initial reaction was “I am going to die.” His first thoughts were of his young family, his future … and what the eventual outcome was going be. After discussions with his doctor he found out as much out about this form of cancer as he could. He tackled his treatment and recovery like he races Ironman, hard and fast. He quickly determined that “I am going to survive.” He endured the required surgery and the subsequent two weeks of radiation and got on with his recovery. He was relieved to get reported back to him by his doctor that there were no lesions located within his body; the cancer had not spread.

Sabatschus experienced immediate results from his treatment. Now he requires less sleep and noticed an increase in energy. He must have. He has plans to race often this year. His tentative schedule has him slated to race Ironman Brazil, the Quelle Challenge in July, Ironman Korea in August and the long distance race in Woodlands Texas in November. In addition he is planning on introducing a new sports drink in July to the public. He’s also actively promoting his coaching services for all levels of triathletes. He claims facing death has mellowed him a bit: “I don’t get as intense about things.” But those competing against him this weekend had better not believe this new attitude will mean he’ll be gentler and less competitive on the race course. He wants a third Ironman Brazil title badly.

On a lighter side, he has a surprise for the professional press conference on Friday. Oscar Galindez and Sabatschus are both shooting for their third titles at Ironman Brazil. He is going issue a challenge for a tie-breaker if neither wins on Sunday in Florianopolis. He is recommending that the winner be crowned on Monday after the two have a soccer shootout from 11 meters out on the Jurere International Beach.
Posted by Recovox at 9:02 PM