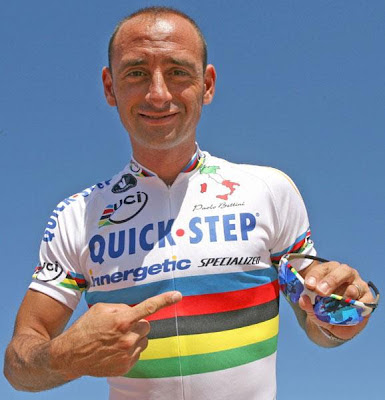 Paolo Bettini will be playing the main part in a fund raising event at the Giro d’Italia. During the three weeks of the race, the World Champion will be auctioning on ebay (www.ebay.it) three rainbow jerseys and three pairs of glasses that have been specially made for La Corsa Rosa.Monies raised from the auction will be going to the European Oncological Institute of Milan that is directed by Professor Veronesi.

The three rainbow jerseys made by Vermarc are part of a limited series of just ten, and will have a picture of Italy and Paolo Bettini’s autograph on the front of them. Paolo chose the picture of Italy as a thank you to all of his Italian fans that have supported him both during the Giro and other races.

The glasses, produced by Quick Step - Innergetic Team’s official supplier BBB, are also a limited, numbered edition of just five pairs. The frames of the glasses will be all of the colours of the rainbow and the arms will be gold colour to represent his Olympic victory of 2004.

The fund raising auction will take place three times during the Giro d’Italia. Each week from 12.00 on Monday until 12.00 on Sunday (CET) people will have the chance to bid on the jersey worn by the World Champion during that weeks race along with a limited edition and numbered pair of glasses.

“I’d like to thank everyone that has helped make this event possible," Bettini said. "First of all the UCI who immediately allowed me to make a slight change to my jersey in light of the extremely good cause. I have already collaborated with the Oncological Institute a few times - back in 2004 and again in 2005 at the Giro d’Italia thanks to the help of Manager Flavio Nascè.

"I’d also like to show my appreciation to BBB and Vermarc who are official suppliers to the Quick Step – Innergetic Team and to the Gazzetta dello Sport that is also supporting the event. Thanks to everyone involved and in particular those fans that take part in the auction, we’ll be able to do our little bit towards cancer research”.

The first auction will start at 12.00 o’clock on Monday, 14th May with a starting price of just 1 Euro. You can take part in the auction by visiting: www.ebay.it or via the following websites: www.ieo.it, www.qsi-cycling.com, www.paolobettini.it.
Posted by Recovox at 8:27 PM