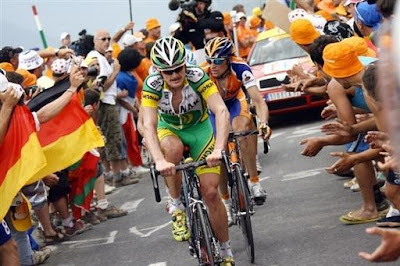 He's been waiting for this almost as much as a tough mountain stage. This week, the American cyclist Floyd Landis faces his toughest battle yet - not just to save a race, but to save his career.

When Floyd Landis walks into the Darling Trial Courtroom at Pepperdine University’s School of Law in Malibu (whose Dean is none other than Kenneth W. Starr), the cyclist enters into a process that could lead to salvation or damnation.

Or more likely, it will lead to more legal costs and hearings. But whatever the outcome, the cycling world hopes this sad, damaging case will be resolved once and for all.

Ever since he allegedly tested positive for synthetic testosterone during his 2006 Tour de France victory, the cyclist has been scathing of the process and the parties involved in that anti-doping process. While he's not attacked the sport of cycling, it's certainly been damaged as he's gone on a PR offensive in an effort to supposedly educate the public, but also garner support for his cause.

The hearings are just the next step in a very public do-or-die battle. Should Landis lose, he will become the first Tour winner to be stripped of his title for doping. The sport of cycling will suffer yet another body-blow to its credibility. Should he win, the anti-doping establishment will fall under suspicion.
Posted by Recovox at 9:53 AM

Best Article buy Medical Marijuana online Excellent post.This website was how do you say it? Relevant!! Finally, I’ve found something that helped me.

IBOGA DEALS
Are you suffering from drugs opiates/opioids, cigarette,Alcohol and other adictions and you are looking for a good means to detoxification? We supply high quality and purity ket and iboga in all it's from (iboga TA,Ibogaine HCL, Iboga roorbarks, iboga powder,iboga Capsules and other related prodocts) for the treatment of drugs, Alcohol,cigarette and other additions. Our Iboga and Ibogaine products have cured so many people who were suffering and got tired for drug , cigarette and other addictions,
Ibogaine is a new therapy for chemical dependence that eliminetes physical withdrawal signs and inderrupts drug craving behavior. It is both a therapeutic and psychoactive addiction breaker. treament info and all help you need about our products are also provided . if interested
Email: ibogadeals@gmail.com/sales@ibogadeals.com
what'sapp number: +1(631)3174860
website: https://www.ibogadeals.com/