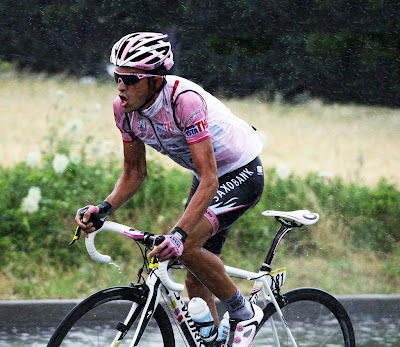 Since we’ve been on an inflammation kick the past couple weeks, I figured I’d start covering some of the areas of health and lifestyle that interact with inflammation. That doesn’t exactly narrow things down, seeing as how inflammation is involved in just about everything, but it does give me plenty of things to discuss. Today’s topic, exercise, was a little tricky, because the relationship between exercise and inflammation is anything but straightforward, seemingly fraught with inconsistencies and facts that appear to contradict one another. Exercise reduces inflammation, but it also increases it. And depending on the context, this increased inflammation due to exercise is either a good thing or a bad thing.

See for yourself. Study after study (epidemiological and clinical alike) shows that extended exercise programs generally reduce markers of inflammation (like C-reactive protein) over the long-term:

■In elderly Japanese women, a 12-week resistance training program reduced circulating levels of inflammatory markers compared to baseline; reductions in CRP were associated with increases in muscle thickness.
■American adults who engaged in frequent physical activity tended to have lower CRPs than adults who were more sedentary.
■In type 2 diabetics, (key term coming up) long-term high intensity resistance and aerobic training reduced inflammatory markers over the course of a year (independent of changes in body weight, meaning activity was the key factor).
■Endurance combined with resistance training reduced CRP in young, healthy women better than endurance training alone.
■In obese, post-menopausal women, a basic moderate cardio program lowered CRP without really affecting body weight either way over the course of a year.
■At the same time, though, several studies also show that exercise acutely spikes inflammatory markers:
■Volleyball practice elicits spikes in IL-6 in both male and female elite volleyball players.
■Acute exercise spiked CRP in cardiovascular disease patients (but a four-month exercise program lowered it).
■This table of inflammatory responses to strenuous endurance events shows some massive spikes in CRP, some up to 20-fold the baseline value.
There are many more out there, but the general gist is that regular exercise tends to lower markers of systemic inflammation while acute exercise increases markers of acute inflammation. And sometimes what’s acute can become chronic. How do we make sense of this? How do we avoid making those acute spikes a chronic, constant thing?

I had originally planned on digging through the literature and assembling a handy guide explaining the specific inflammatory responses to the different types of exercise, complete with exercise prescriptions based on cytokines and C-reactive protein and all that fun stuff until I realized that such an undertaking is too massive for a blog post, impossible given the limitations of the literature, and overly complex and frankly useless for the average reader. Instead, we have this: a rambling discussion of inflammation and exercise, peppered with helpful nuggets of advice wrought from years of personal (and painful) experience.

Effective exercise is inflammatory exercise… to a point.Some degree of inflammation is necessary if you hope to get anything tangible out of a workout regimen – hypertrophy, increased stamina, increased strength, improved work capacity – because your body gets stronger via the inflammatory response to the stress and by rebuilding and refortifying its tissues to deal with future demands. An effective training session is basically an acute stressor that initiates a transitory, temporary, but powerful inflammatory response. An effective training regimen is composed, then, of lots of those acutely stressful training sessions interspersed with plenty of recovery time against a backdrop of lots of slow moving and good nutrition. You can’t escape that.

Avoid inflammatory plateaus.Track your training. Plotted on a graph, the inflammatory responses to your training should resemble a series of peaks, dips, and valleys. If you don’t let your last exercise-induced inflammatory spike recede before exercising again, you’ll only heap more on the pile. If you keep stringing together spikes in inflammation without recovering from the previous one, they start to overlap and that starts to look a lot like chronic inflammation. That gives you a plateau, a mesa of inflammation. Avoid the mesa.

(You don’t actually have to order CRP tests after every training session and create Excel spreadsheets to “plot your inflammation.” Feeling it out is perfectly fine. Review last week’s post for symptoms and see if you qualify.)

Remember that acute inflammation (good, healthy, necessary) is characterized by an inflammatory response that resolves quickly, or as soon as the offending factor is removed. This takes a day or two, maybe even three, but as long as you remove the stinger/take your hand out of the flame/kill the pathogen/put down the barbell for a couple days, you will recover and the inflammation will subside. Inflammation becomes chronic when the stress is not removed, when you keep getting stung by the same bug/putting your hand in the flame/licking the dirty spinach/doing heavy deadlifts every single day. Don’t do these things and expect differently.

Any type of exercise – besides maybe walking – has the potential to become chronic and induce a state of chronic inflammation. Doing high-intensity Crossfit WODs every single day will do it. Training for a marathon will do it. Do what you enjoy without it becoming chronic. Endurance events aren’t going to kill you, but training for them might.

The reason why I single out Chronic Cardio, marathoning, triathlons, and other ultra-endurance events (and why it’s the easiest way to overtrain and become systemically inflamed in the process) is because excelling at those activities usually requires a ridiculous amount of training time. If you want to be the best Olympic weight lifter you can be, you’ll have to train hard and train often and undergo serious stress, but you won’t be under load for more than a second or two at a time. If you want to be the best endurance athlete you can be, you’re likely going to be “under load” for hours and hours each day. There is very little give in these sports, which is why regular endurance work is so problematic for so many people.

Endurance training is problematic for another reason: you can always complete the workout even when you should be resting. If you’re having a bad training day as an Olympic lifter, you simply won’t make the lift. You can’t slog through a heavy snatch; the necessary effort precludes you even attempting it. You’ll deload or call it a day or make it a light workout, but you’re not going to “power through,” because you physically cannot. But because endurance work is lower intensity, you can slog through the days when your body is trying to tell you to rest. It won’t be pretty, and you’ll feel awful and slow and heavy, but you’ll finish – and you’ll dig yourself in even deeper.

Interestingly, folks who run ultramarathons tend to have lower resting CRPs than marathoners. This threw me for a loop at first, but after thinking some more, it makes sense. All the ultramarathoners I knew were the guys who either couldn’t hack it as marathoners or simply didn’t want to push themselves to the brink. They were generally fairly laid back, while we marathoners were the hyper-competitive types. They would just kinda mosey along at a reasonable pace, while we treated 26.2 miles almost like an extended sprint. Our pacing was GO GO GO *slurp glucose gel pack* GO GO GO. Though they covered far more ground – sometimes more than 100 km – they never dug deep, not in the same way we did. They never had to “go to the well.” My well was running dry by the time I finished my career.

Yeah, exercise is a funny subject. There isn’t really a one-size-fits-all detailed prescription, which is why when I offer my suggestions for exercise on this blog, I try to keep them very general. Rather than prescribe this many sets of these specific lifts for this many reps at this weight, I say “lift heavy things.” That could be bodyweight, sandbags, barbells, kettlebells, or the latest in HIT machine technology. Rather than tell you to jog at this heart rate for this long at this grade this many times a week, I suggest you “move frequently at a slow pace” and “run really fast once in awhile.” You could move slowly or really quickly on your feet on the street, on a trail, on a bike, in a pool, as you garden, or even in place (burpees, anyone?). Sure, I think a day or two of lifting, one session of sprinting, and as much slow movement as you can possibly stand each week are reasonable targets for the general public, but it’s honestly really wide open.
Posted by Recovox at 11:30 AM