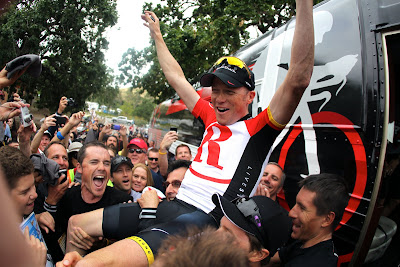 RadioShack-Nissan presented five grand tour contenders on stage at their launch last week in Luxembourg and one of their quintet of hopefuls, Chris Horner, isn’t worried about the team’s hierarchy.

The American veteran will aim to peak for both the Tour of California in May and then the Tour de France. Easier said than done, no rider has managed to pull off successful bids at both races in a single calendar year since the US race moved from February to May.

Well aware of the task at hand, Horner is a resilient character, epitomised by his desire to prolong a career when others may have chosen to retire after crashing out of last year’s Tour de France.

In this exclusive video for cyclingnews Horner talks about his recover from his crash at last year’s Tour de France that left him with serious injuries and the potential battle with Levi Leipheimer at this year’s Tour of California.