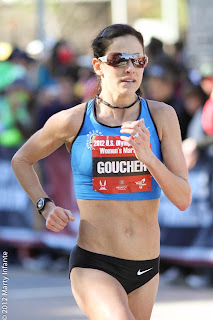 Kara Goucher of Portland, Ore., placed third in Saturday’s U.S. Olympic Marathon Trials for women in Houston, Texas, to earn a spot in the 2012 Summer Games in London.

The top three women and men advanced to the Olympic Games. Both races were held on the same day and the same course for the first time in American history.

Saturday's trial was the second marathon for the 30-year-old Flanagan and first since she was the runner-up in New York in 2010. She has qualified for her third Olympics.

Davila, 28, the runner-up in Boston last year, is set to make her Olympic debut.