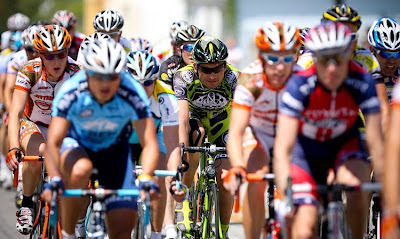 Rock Racing's Fred Rodriguez was content to sit comfortably in the pack until the final miles of the race.

“Fast Freddie” placed eighth in the bunch sprint, which was marred by a crash on the final turn in the downtown streets of Augusta. Juan Jose Haedo (CSC) won the 116.9-mile (188.1 km) race ahead of Greg Henderson (Team High Road) and Ivan Dominguez (Toyota-United Pro Cycling).

“I’m lacking a little bit of fighting mentality,” Rodriguez said. “Coming off a bad crash (at the Redlands Bicycle Classic two weeks ago), I’m just a little hesitant. I had Haedo’s wheel coming into 700 meters to go and I let him have Dominguez’s wheel for a second. Then I just lost control a bit and a couple guys came by me. I came out of the final corner eighth and ended up eighth.”

A gutsy move by Rock Racing’s Oscar Sevilla on the final lap of the five-mile finishing circuit whipped Rock fans into a frenzy. Sevilla and Ted King (Bissell Pro Cycling) countered an attack on the first trip up a small climb on the second-to-last lap of the finish circuit.

Rodriguez said Rock Racing’s plan was to make the race as hard as possible near the end.

“The more everyone suffers, the more it plays to my strengths,” he said. “Oscar’s attack proved he was one of the strongest guys in the field. Even after he got caught, he and Santiago instituted a real hard move on the hard part of the hill the last time up.”

At least a dozen riders went down in the final-turn crash that occurred one-and-a-half blocks from the finish line. No Rock Racing riders were involved, however.

“The team is getting stronger and stronger and I’m starting to feel better,” Rodriguez said. “The next couple of stages are going to suit me and suit the team much more.”