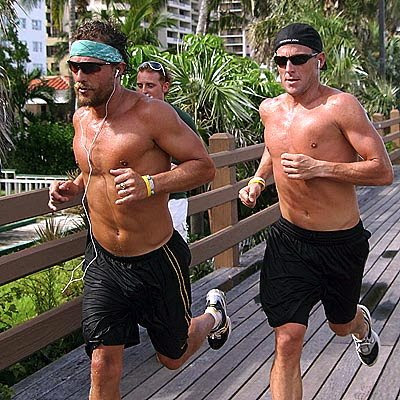 Off his bike and into running shoes to prepare for his first Boston Marathon, Lance Armstrong, 36, talks about steep hills, steroids, and his buddy Matthew McConaughey.

So how's the training going?

I must confess, not as well as I hoped.

Is it just hard to find time?

My only excuse is I was in Hawaii. While training I stepped into the water and stepped on a piece of coral and cut myself right under the big toe.

Ouch. What's the biggest difference you find between cycling and running?

The pounding of running versus the efficiency of cycling. It's harder on the tendons and joints. Also, training is different. A long run might be two or three hours. A long ride might be eight.

You're familiar with hills. So I guess Heartbreak Hill doesn't worry you.

You hear a lot about it. I have yet to see Heartbreak. I feel like I know it. Hills don't scare me, but marathons do.

You're a competitive guy. Now that you've run two marathons, are you pushing to go faster each time?

After the first one, I definitely had doubts about whether I wanted to do another. It was so painful. I did the next one and found it a lot easier. But if you asked me if I had a time goal for Boston, I'd say no. If I finished around three hours, I'd be happy.

You know what it's like to face steroids accusations. Have you followed baseball's crisis?

I never grew up a baseball fan. I grew up in Dallas, where the Cowboys ruled. It's not a baseball issue or track issue or cycling issue. It's a sports issue. Until everybody relaxes and all sports start to be governed the same, we're going to have the argument. There are no standards. If professional cyclists have to be clean all hours and days, then Tom Brady should, too, and Roger Federer, and Tiger Woods. Otherwise, you'll have guys that essentially just get picked on.

Have you read anything good lately?

I'm not a big book reader; I read the papers front to back. On the way to Hawaii, I read Sidney Poitier's biography from a few years ago.

How'd that book come to you?

He's a friend of mine.

Texas had a big stake in the Democratic presidential campaign last month. Did it surprise you that Hillary won?

What we saw in Texas is it's a black and Latino issue. You would think they would be aligned on this, but they weren't. If I was Barack's campaign manager, I'd be getting him some Spanish lessons on iTunes right now.

OK, so seriously, how much are you running?

Five or 6 miles a day, a couple long runs, that's the extent of it.

I know your good friend, Matthew McConaughey, is up here filming a movie. How's he doing?

He e-mailed me this morning. Said it was too cold. He had to put a shirt on.
Posted by Recovox at 6:51 PM

Love Lance Armstrong. His comments on spreading the drug testing from cycling to all the other sports is just what should happen. Glad he is doing so well. He travels so far and does so much in the cancer fight. Wish Greg LeMond would have an epiphany and just leave LA alone. This latest lawsuit of his against Trek and Lance, is just so strange. Ignore it, Mr. Armstrong, and just keep on inspiring the rest of us.