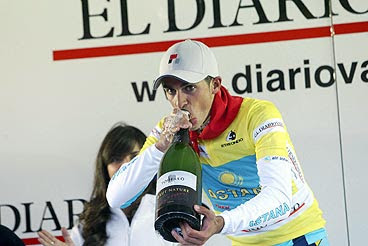 Third time is the charm: after missing victory by a whisker in the first two stages, the Basque David Herrero (Spa - Karpin-Galicia) could finally hit the target as he prevailed in Wednesday's third and longest leg of the 48th Tour of the Basque Country, that took the bunch from Erandio to the Navarran town of Viana over 195 kilometres, with four climbs in the menu, three in the second half of the parcours. The stage came down to a massive sprint, and Alberto Contador (Spa - Astana) held on to his yellow jersey, with David Herrero and his teammate Ezequiel Mosquera as closest GC threats.
Posted by Recovox at 12:48 PM