The Primal Athlete - How to Fuel a Marathon 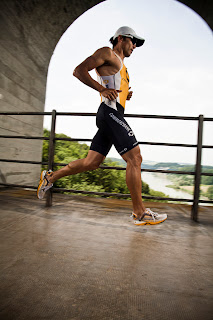 Having yielded to those of you who still insist on running a marathon, yesterday I offered a training strategy that gets you the best results with the least amount of damage. Today’s post is about fueling a marathon – what food to eat and when to eat it. It’s not solely about race day nutrition, because if you just focused on what to eat the day of the race, you’d be missing out on a lot (and you’d likely have problems finishing, or at the very least your performance would suffer). It’s about what to eat while training, a few days before the race, and the day of the race itself. This is the stuff I would do if I had to go back and do another marathon with my current knowledge. I might tweak things slightly if I was trying to make the Olympics, but for the average, relatively fit Primal dude or gal who wants to check this off their bucket list? This is the perfect way to fuel your efforts. And this works equally as well for those of you who think a century ride (100 miles on a bike) might be in the cards.

First, let’s examine what to do while you’re training. What do you eat? How much of it do you eat? Low-carb, high-carb?

Train Low, Race HighFor the layperson, “train low, race high” is basically a way to teach your body to do without a glut of glucose for longer periods of time. By training low on glycogen, your body grows accustomed to running on fat and conserving muscle glycogen. By training low and then racing high – with topped-off glycogen stores in your muscles – you experience a big boost in performance on race day. You’ve built up your ability to access body fat during a run, and that doesn’t go anywhere, but now you’ve suddenly got 400+ grams of muscle glycogen at your disposal. Glycogen that you’ve learned to access efficiently, rather than squander all at once. That’s huge, especially for 26.2 miles.

It’s reasonable to think that Grok often “trained low.” If low-level physical activity in a glycogen-depleted state was the norm for much of human evolution – as I think it probably was – it makes sense that its emulation in modern times would confer performance benefits. It makes sense that our bodies would conserve energy and streamline energy pathways, and that taking advantage of these physiological truths will give us enough of a racing edge without compromising our health – since we’re training “with” our physiology, rather than in direct opposition to it.

There’s been limited modern research on “train low, race high,” and it’s pretty compelling. One study found that athletes who trained twice a day on alternate days and thus had lower muscle glycogen during the second training session almost quadrupled their muscle endurance, while athletes who trained once a day on consecutive days barely doubled theirs by study’s end. Both groups of athletes performed the same amount of volume and intensity, but only one group went into every other training session with depleted glycogen – and that group saw the greatest benefits to both work capacity and energy efficiency (glycogen and fat).

During your training, keep carbs right around 150 grams per day. That may sound like a lot, especially if you’re coming from the lower end of the carb continuum, but rest assured that 150 grams of carbs is a paltry amount for most endurance athletes. At the height of my training, I was blasting through upwards of 700 grams each day. As I mentioned yesterday, increase your carbs the day before – and morning of – your interval training, because much of the benefit from intervals comes from glycogen depletion, and you gotta have glycogen in your muscles before you deplete it. But for the most part, keep carbs at a moderate (for Primal folks) to low level. Stick to approved Primal sources, of course:

And remember: you’re training. Your performance during a particular run on a particular training day might not go great, but you’re in this for the long haul. You’re in this for the race day boost. It’s not a competition. You’re not trying to beat the other guy (because there is no other guy), you’re trying to train your mitochondria and your energy utilization pathways so that when the time comes, when the event rolls around, you are fully prepared to give it your best showing. Keep it in perspective and don’t beat yourself up too much. One final thought on training: it’s always better to start your race slightly undertrained than over-trained.

Couple Days Before the RaceStart eating more carbs. This is the classic carbo-load, and no, it doesn’t have to reach Phelpsian levels of mayo-and-egg sandwiches on white bread, kilos of pasta, and flagons of cheese grits. You can easily stick to starchy roots, tubers, and fruit (and even rice) to pack those muscles full of glycogen. Maintain your protein intake and moderate your fat intake. You’re looking to maximize muscle glycogen stores.

Just eat twice the amount of carbs you’ve been eating. So, instead of one sweet potato with dinner, have one with lunch and one with dinner. Eat the whole banana instead of half the banana. Aim for about 350 grams of carbs per day. And don’t do any hard training during these last two or three taper days. Maybe some light jogging or walking.

Race DayIf you have two hours before the gun goes off, eat a light breakfast with some representation from all macronutrients. Maybe a few eggs and a banana, maybe half a yam. Nothing that sits heavy in the stomach, and make sure it’s something you can digest. If you are a coffee drinker, a cup today will help mobilize fatty acids. Don’t go zesty, don’t experiment with something new. Stick to the tried and true. If you didn’t spend the last couple of days fueling up, the most optimal race day breakfast isn’t gonna save you. Sorry to say it.

During the race, maintain your composure. Your glycogen-replete body is going to feel eminently powerful. Try not to go too fast too soon. Better to start a bit slower, get those fats into the muscle cells and then increase the pace a bit later. As for mid-race fueling, I’d forgo the usual Gatorade offerings on the course and stick to the rocket fuel found in pure glucose. Some companies sell straight glucose polymer powders (complex carbs as maltodextrin) you can mix with water to your own desired consistency and carry with you on a fuel belt. This is the one time in your life that straight glucose is your friend. The method I have recommended for 20 years is to start refueling at about an hour in to the event, taking 20 grams of glucose every 20-30 minutes. This puts enough glucose into the bloodstream to help fuel muscles without interfering with the intended fat combustion – and it “unburdens” the muscles from having to give up too much glycogen too soon. Be sure to drink enough pure water (usually offered on the course, so you don’t have to carry that) as well.

Now, if you are so inclined, you can also make your own version of a sport drink/energy gel hybrid. It may not be astoundingly delicious, but it’ll get the job done. Here’s how to do it:

1.Slightly heat some coconut water on the stove. Don’t let it get anywhere near simmering. Just let it get warm enough to melt the next three ingredients easily.

2.Add a few dashes of sea salt, preferably one with high mineral content. Sea salt provides sodium, an important electrolyte, plus trace minerals. You’re going to be burning through a lot of it during the race.

4.Add blackstrap molasses. Blackstrap molasses comes after the third boiling of sugar cane. It contains less sugar than either white sugar, brown sugar, regular molasses, or dark molasses, but far more minerals and electrolytes. See, sugar cane is a plant with roots that stretch deep into the soil to extract nutrients (some research suggests sugar cane roots may go down as far as six meters). Very few of those nutrients make it into white or brown sugar, and regular and dark molasses contain some, but it’s blackstrap molasses which gets the bulk of the minerals. So, when you add just a couple tablespoons of blackstrap molasses to your energy drink, you’re getting more than twice the potassium than a banana, more calcium than a cup of raw spinach, and almost 100 mg of magnesium.

5.Mix it all together until everything melts and it’s a dark brown murky viscous fluid. I didn’t include specific amounts, but start with a couple tablespoons of each sweetener and the juice from one coconut (or one carton of coconut water). You’ll be cruising for the first bit of the race, thanks to your effective pre-race training and fueling, but when you really start dipping into your glycogen stores, having a banana or two and a bottle of high-potency Primal energy drink will prove useful.

Good luck. If you train and fuel smartly, you won’t really need any luck at all, but I figure it’s a nice thing to say regardless.

Once you’re done with the marathon, I’d move on to different things. Try rock climbing. Try mountain trekking. Heck, try an ultra marathon, but do it at an even easier, fat-oxidizing pace. But many of you will not. Many will get the endurance bug, and it’s a nasty one. This method of training and fueling is not a cure for the bug, but it will negate some of the worst symptoms. If you do try my training and fueling recommendations, let me know how you do. I’m especially interested in knowing how they compare to performances using other methods.
Posted by Recovox at 3:42 PM