Kelly Slater confirmed in the Quiksilver in Memory of Eddie Aikau 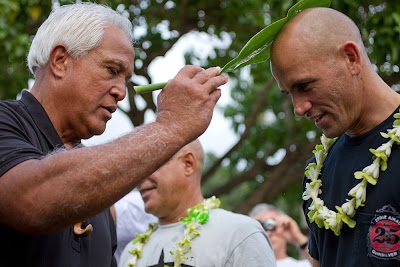 Kelly Slater has been confirmed in the 27th edition of the Quiksilver in Memory of Eddie Aikau. The 10-time world surfing champion was one of the invited riders and will paddle out, if a big swell hits Waimea Bay, in Hawaii, between December 1st and February 29, 2012.

The opening ceremony has already taken place and the elite surfers gave their hands to praise the gods. It’s a rare international sporting event that can have no set date, be held just eight times in a span of 27 years, and still gain strength.

But the lifeblood of the big wave Quiksilver In Memory of Eddie Aikau lies in what one man’s life represented: the best that surfing and Hawaii have to offer the world.

The story of Eddie Aikau, a Hawaiian hero who saved and inspired lives as Waimea Bay’s resident lifeguard and big wave charger, continues to touch generations. It’s a story that is told anew each December, when the opening ceremony for the event in his honor takes place on Oahu’s North Shore, as it did yesterday.

The Quiksilver In Memory of Eddie Aikau is a one-day big wave surfing event that only runs when, and if, waves at Waimea Bay reach a minimum height of 20 feet. It was last held in December of 2009.

It is a tribute to Aikau, who rode the mountainous waves of Waimea Bay in the late ’60s and early ’70s and saved lives as its first full-time lifeguard. He was lost at sea in 1978, west of the Hawaiian Islands during a voyage of the Polynesian sailing canoe, Hokule’a.

Hokule’a capsized in heavy seas, stranding her crew. Eddie insisted upon paddling for land to get help, but was never seen again.

“There will be waves,” said Hawaiian kahu (priest) Billy Mitchell, in a voice that traveled to the far reaches of the bay. “But those of you here today know that this is about much more than that.

“Eddie had a passion. He had a passion about living and loving the ocean. Whether you surf or you don’t surf, you are drawn to people like Eddie in life. People with big mana (spirit). We have to remember, and we cannot forget, someone who lived this way. Eddie never left people behind. It was his way. We need that in this life, especially now. It’s a way to surf; it’s a way to live.

“This event is Eddie’s story, and it is a ripple in the ocean to travel around the world.” The defending champion is California’s Greg Long. Past champions are Denton Miyamura (Hawaii), Keone Downing (Hawaii), Clyde Aikau (Hawaii), Noah Johnson (Hawaii), Ross Clarke-Jones (Australia), Kelly Slater (USA), and Bruce Irons (Hawaii). 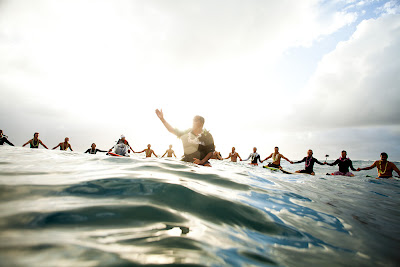