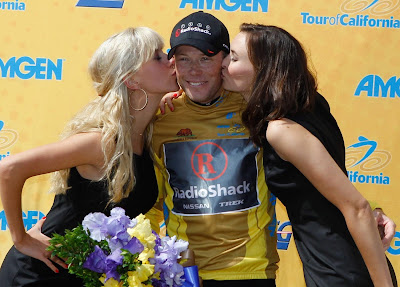 Chris Horner (RadioShack-Nissan) has begun training a month earlier than usual as he prepares to make his return to competitive action following his heavy fall at the 2011 Tour de France.

The American suffered a broken nose, cracked ribs, concussion and a blood clot in the lung as a result of his crash on stage 7 of the Tour, and was forced to bring both his race and his season to a premature halt. After five months, Horner is keen to get back into action.

“Normally I wouldn’t even be riding now,” Horner told us. “Normally two hours in a day is the very most I’d have done in early December. Then I’d take the last three weeks of December off and start riding the home trainer while I’m up in Oregon for a week, and then I’d go up to San Diego the second week of January on the road, and then we’d normally have training camp near the end of January.”

This time around, however, Horner has been out on the road since the beginning of December, and made the most of RadioShack-Nissan’s recent training camp in Calpe, Spain to get in some warm-weather miles.

Last winter, RadioShack’s American riders were not requested to cross the Atlantic for the team’s pre-Christmas training camp. The merger with Leopard Trek meant that Horner was happy to make the trek on this occasion.

“Normally I don’t believe so much in December training camps, but you’ve got to get together when it’s a new squad like this,” he said.

As in 2011, Horner will aim to perform strongly in week-long stage races throughout the early part of the new season as he builds towards the Tour de France, where he will play a vital role in Andy and Fränk Schleck’s overall challenge.

“I hope to have a good beginning to the season with the Basque Country and California of course, and then focus in on the Tour de France,” Horner said. “I would like to do more or less the same programme and maybe one or more stage race in there this year, just because it’s been so long since the crash at the Tour when I last raced.”

“It’s been a long time and I’m ready to race, so just for pure and simple pleasure and desire and to feel like a bike racer again, I’d like to do something a little early, like Paris-Nice or Tirreno. That would be ideal.”

Although now 40 years of age, Horner has no plans to hang up his wheels and believes that his injury-curtailed 2011 campaign may even lengthen his career in the long-run. “I just skipped six months of bike racing, so maybe I’ve added another year to my career, maybe it adds to the freshness of my legs,” he said. “As long as the legs do it, I’ll continue. There’s no set date, it’ll just be a case of when I feel the legs are gone.”

Looking back over his career, Horner reckons that he has significantly less mileage on the clock than European-based professionals of his vintage, something which he feels goes a long way to explain his remarkable longevity. Although he began his career at Française des Jeux in 1997, Horner spent the period from 2000 to 2004 in the United States, before beginning his ‘second career’ in Europe with Saunier Duval.

“I raced back in the States from 2000 through to 2004. In 05, I came back over with Saunier Duval but I broke my leg early in the year, so I missed a lot of that,” he said. Then in 2009 I crashed and missed a bunch of that season too. So realistically the amount of years I’ve spent in Europe is pretty low compared to most guys who are 40 years old.

“When you look at Inigo Cuesta, I mean, that guy had done 14 Vueltas or 16 Vueltas. I can’t remember, but it was a huge number. You’d have to ask him personally, but maybe every year of his career he did 80 European races. I’d never do 80 European races. The most I’d normally do is 70 and since I came back in 05, I don’t think I’ve even done that many. But that could be why the legs are so good right now.”
Posted by Recovox at 6:48 PM