Hanging out with Faris 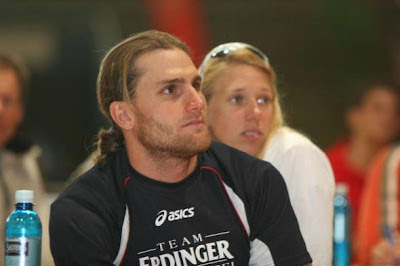 Someone needs to explain to Faris Al-Sultan that he’s just got to smarten up. You simply can’t be as good as he is and still be so laid back and easy-going about his training and racing.

You can’t be a world champion and not have a manager, even in our sport. This guy not only doesn’t have a manager, he replies to all his own e-mails. Every one. What is that? You can find his phone number in the phone book. It gets even better. How do you think he got to the pro meeting here in Frankfurt today. Sponsored car? Nope. Limo? Guess again. Taxi? Hardly. The 2005 Ford Ironman World Champion took the subway.

It gets even better than that. His girlfriend, Ina Reinders, was desperate to get back to the hotel to rest after the pro meeting. She had to wait every few hundred meters because … his cell phone kept ringing – friends and acquaintances kept calling to wish him luck. One woman who stopped him to sign her race program didn’t just get his autograph, it looked like he wrote her a full fledged memo.

Al-Sultan needs to get with the program. Sure, there are lots of really nice world champions out there. I know lots of them. But I don’t begrudge them the chance to hide for a few days before a big race. On that note, here’s another thing. Once you become one of the best in the world, you’re supposed to be negotiating new deals all the time, not loyally sticking to the same major sponsors you’ve had since 2001.

OK, while I’m on this roll: Even his appearance doesn’t fit with an athlete as good as he is. Riding next to him, you look over and think “I can dust this guy.” You don’t see bulging muscles. He’s not cut and defined like, say, his countryman Normann Stadler. Heck, he wears his hair in a ponytail.

He doesn’t even act like a big-time pro. All of Germany is raving about the upcoming battle between Normann Stadler and him on Sunday, and he just happily hangs out waiting for the big race. He rode the course with all the age group athletes on Wednesday. No trail car. No helpers. He had an extra water bottle in his back pocket.

Faris … get a grip! It’s the week before the Frankfurter Sparkasse Ironman European Championship. You’re supposed to demand your own car to escort you around the course!

The first time I ever saw Faris Al-Sultan was at Ironman Canada in 2004. Three nights before the race the rest of the pro field was in hiding, hydrating and resting and staying out of the spotlight. Not Faris. He was planning on doing a run that day, so he figured he might as well do the 5 km fun run. He loped his way to second that night, and followed that up with a fourth place finish a few days later in Penticton.

I remember underestimating his chances a few days before I watched him dust the field at Ford Ironman Arizona in 2005. When I saw what he did to some of the world’s top triathletes that day, I told anyone who wanted to listen to me in Kona later that year that he was likely the man to beat. I still remember Bob Babbitt and Paul Huddle asking me what gave me that inkling after Faris became the 2005 World Champion …

“What impressed me so much about Faris was that he seems to have such a great attitude,” I told them. “He truly seems to be completely relaxed out on the course – he goes hard, and if he wins, great. If he doesn’t … it seems as though he is happy to have given it his best shot. It’s also very deceptive watching him race – he’s going much faster than it looks. There’s a lot of power hidden in that body.”

I’m slowly learning that Faris isn’t really that laid back about his racing. I’m not sure if he has some hidden killer instinct that miraculously appears when the gun goes off, but in an interview today he told me he was getting a bit nervous about Sunday’s race.

We could do worse than have Faris Al-Sultan continue to be one of the world’s best Ironman athletes. He’s intelligent, he’s accessible, he’s well-spoken and he’s an excellent ambassador for the sport. I wish he would wear a helmet when he was training. I applaud his quick willingness (along with the entire pro field here in Frankfurt, as far as I can tell) to consent to a blood test as an anti-doping measure here in Frankfurt.

So maybe I don’t want to see Faris Al-Sultan change too much. Good luck on Sunday.
Posted by Recovox at 11:14 AM