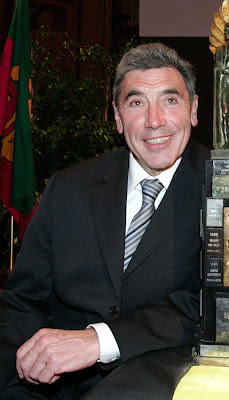 Ullrich's decision to quit came after he was implicated in an alleged blood-doping network being run by a Spanish doctor, Eufemiano Fuentes, and sacked by his T-Mobile team during last year's Tour de France race.

The team said at the time that damaging evidence from Spanish investigators in Madrid prompted the decision to drop its star rider.

Announcing his decision Monday, Ullrich, 33, the 1997 Tour de France winner and five-time runner-up, said he never recovered from not being allowed to race.

"It was to be expected. Ullrich didn't have a team so it's difficult to race," said five-time Tour de France and Giro d'Italia winner Merckx. "It was a sad way to go out. The Fuentes affair brought him down without a doubt despite the fact that there was no judgment.

"Ullrich started to race very young and always had a lot of pressure on his shoulders. He was tired mentally and that's without a doubt why he didn't always do what was necessary for his profession.

"Maybe Jan was too laid back but the fact is that cycling has lost a great name," added the 61-year-old Belgian.
Posted by Recovox at 9:48 AM