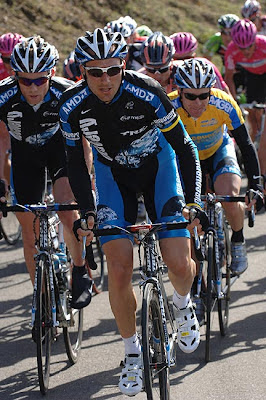 Wednesday's display of force in the Tour of California by Discovery Channel's Ivan Basso was an investment in future objectives and ensured that Levi Leipheimer stayed in the leader's golden jersey. The American noted the work of his Italian teammate after the stage, "Thanks to Ivan Basso for this great work that he did, in particular at the beginning of the stage," he told La Gazzetta dello Sport. "He went to the front and did a beautiful pull."

The words were contrasting to an article in the Los Angeles Times a few days prior, when the 33 year-old questioned the signing of Basso. Both riders are new to the team for 2007, but Leipheimer was signed in first by Team Manager Johann Bruyneel, and most were surprised in early November when he signed Basso. "I remain a little upset that Discovery took on Basso," Leipheimer said in the American paper. He continued, hinting at possible reoccurring Operación Puerto investigations, "I can understand the motives; he is the number one favourite for Tour, even if there remain unanswered questions about him."

Maybe this is why Basso wanted to put on such a display of force for his teammate in stage three to San José; to prove that the team was not to be completely centred on him. "Yes, I am helping Leipheimer to win, then I hope that further in the season that it will be the turn of him and the others to give me a hand," the 29 year-old rider from Varese commented to La Gazzetta dello Sport. "And now, this work is helping me a lot."

In the team car for the stage into Leipheimer's home town was the former rival of the two new Discovery signings, Lance Armstrong. "It was a very interesting stage that was developed with a lot of battles," noted the seven-time Tour champion. "I am happy that Basso has accepted this role [as domestique]; he has a lot of respect for this race."

Basso confirmed that he was giving his all for his teammate, even if it meant finishing three minutes down while Leipheimer fought for glory. "I would have wanted to pull in the second part, up to the top of the climb, but [George] Hincapie and [Tom] Danielson came up and I had to drop off immediately after the beginning of the climb," he noted. "Had I not done so much work in the pervious days then maybe I could have stayed up front." Instead he listened to race radio as his teammate kept the leader's jersey but lost the stage to his former CSC teammate Jens Voigt.
Posted by Recovox at 9:54 AM