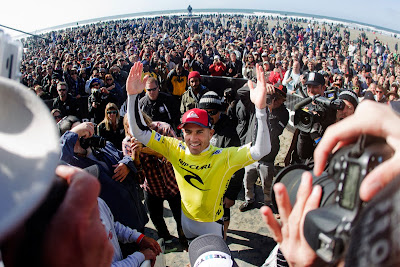 Still, if you were a fan of surfing and wanted to see the world's best surfers tackle the strong currents, heavy waves and blustery conditions that often accompany Ocean Beach, chances are you weren't disappointed.

While the drama surrounding Kelly Slater's 11th World Title captured most of the attention, it was the incredible display of surfing at Ocean Beach that stole the show. Surfers like Slater, Medina, Parko, Taylor Knox and Josh Kerr humbled a lot of Ocean Beach regulars who rarely see the deep barrel rides and aerial displays that the pros did with relative ease. Without question, the thousands of spectators that assembled to watch the world's best surfers certainly didn't leave disappointed.

As for Slater, his San Francisco experience could be best described as a mixed bag. On one hand he won his 11th World Title here, and his first celebration was during an unbelievable day when Ocean Beach was offering perfect surfing conditions under clear, beautiful sunny skies with light offshore winds. The crowd went crazy and Slater had a blast later that evening drinking beer and bowling.

While it was Slater himself who discovered the ASP's mathematical error that resulted in Slater having to go back out and win another heat to make his 11th World Title official, out he went during a colder day with stronger currents and choppier waves to make sure that the chase wouldn't leave San Francisco. What did disappoint Slater a little though was losing in the quarterfinals to eventual contest winner Medina, resulting in finishing the contest tied for fifth place.

"I was totally out of sync, but got the job done earlier," said Slater shortly after his quarterfinal heat. "It's always nice to try and win the event if you're in it. I just couldn't put it together out there. I've had three fifths this year. I hate fifth places." Slater chuckled after that last comment, although given Slater's competitive drive he probably wasn't joking that much.

Slater did get a chance to talk about his experience in San Francisco. "I expected a little more fog than we had," said Slater, who has reportedly been staying in nearby Pacifica. "Basically it's about what I thought. We went and saw some of the sights, and went into the city a little bit so far. I think we're a little bit lucky with the water temp. It's a bit warmer than I think it usually is. I was surprised I didn't need booties or gloves. It was about what I thought wave wise, and it's been a good trip."

Slater is rumored to still be in the San Francisco area. Don't be surprised if you run into him in the city, or see him at Candlestick Park Sunday when the San Francisco 49ers host the New York Giants in a pivotal NFC Conference game.

Some other notes and thoughts as the Rip Curl Pro Search San Francisco has come to a close:

•One of the fascinating aspects of having an ASP World Tour contest in San Francisco was the old school feel of it. On the first day of the contest, with currents running extremely strong going north to south and no PWCs allowed, surfers like Adriano de Souza would catch waves going right, ride them as far in as they could, then run on the beach north before heading back into the water. This is what professional surfers used to do back in the '80s and '90s. Now, most ASP World Tour contests use PWCs to take surfers back to the lineup when currents become an issue. It was fun watching the surfers having to use their legs more than usual.

•Another unusual aspect of having the contest at Ocean Beach was seeing local surfers repeatedly ignore warnings from the loudspeakers by beach commentators to stay away from the contest zone. This rarely if ever occurs at other ASP World Tour events, although it was a more usual occurrence some 20 years ago. On more than one occasion, you had the best surfers in the world sitting literally in a pack of locals, all of whom were fighting for the same wave. Joel Parkinson reportedly had a local cut him off in the opening round. Kelly Slater was also among the competitors who found themselves at times surrounded by local surfers fighting for the same waves.

•Shortly after Kelly Slater's quarterfinal defeat to Medina, San Francisco 49ers starting quarterback Alex Smith and starting offensive linemen Joe Staley and Adam Snyder, a day removed from the 49ers's 19-11 victory over the Washington Redskins, stopped by Ocean Beach to watch the Rip Curl Pro Search San Francisco. Slater and Smith chatted for a short while. Slater signed autographs for Snyder, a Southern California native who has surfed since high school and owns six surfboards. The 49ers players brought their families along and looked like they were enjoying themselves.

•It was appalling watching ASP CEO Brodie Carr, who came straight to town after the ASP's World Title blunder, celebrating and having beers with ASP Tour Manager Renato Hickel shortly after the completion of the contest. Even though the majority of the surf community doesn't follow the ASP with the same passion and fervor as say a fan of the NFL does, many were clearly outraged over arguably the biggest blunder in ASP history of miscalculating the necessary points needed for the World Title. Carr did the right thing this week, resigning as CEO of the ASP. "It is my duty to accept responsibility for the recent calculation error that resulted in the premature crowning of Kelly Slater's 11th ASP World Title," said Carr. "The determination of the ASP World Title is the most important moment in professional surfing. Ultimately, the responsibility for every activity within ASP lies with me. Therefore, I have elected to resign my position as CEO." Carr wasn't the only person offering his resignation. Hickel offered to resign as well, but his resignation was declined by the ASP board. Carr's decision restores some integrity to the Association of Surfing Professionals.

•Carr's decision to resign as CEO of the ASP came after a meeting of the ASP Board of Directors in San Francisco, at Japantown's Kabuki Hotel. Carr's resignation wasn't the only issue addressed at the meeting. Acording to The Australian, the ASP board decided that starting next year, the ASP will implement drug testing to the World Tour. Details are very vague at this point, including how the tests will be administered and what drugs they will be testing for.

•It was a curious decision by the Rip Curl Pro organizers not to include Fort Point as a San Francisco location in addition to Ocean Beach, especially since a lot of their merchandise had images of Fort Point on them. During one of the lay days, a large number of pro surfers went to Fort Point to try out one of the few good point breaks north of Santa Cruz. The surfers had a great time with San Francisco's iconic left point break.

•Kalani Miller, Kelly Slater's longtime girlfriend, is a million times hotter in person, both in looks and personality. Miller, a former Roxy model who recently started a business called MIKOH Swimwear that has quickly risen in popularity, usually shows up to contests to support her boyfriend. Considering Slater's history of conquests, including Pamela Anderson, Giselle Bundchen, Bar Rafaeli, and Cameron Diaz, one could be a little surprised considering Miller prefers to be out of the limelight. Given Miller's friendly persona and beautiful looks, one can fully understand why Slater is happy settling down.

•Slater and Miller own a rescue dog named Action. When asked what breed the dog is, Miller said, "Mix. We rescued her, so we don't know the breed." Slater was introducing Action to numerous people after his quarterfinal heat, including some kids who were in the athlete area.
Posted by Recovox at 11:26 AM