Bad math or not, Slater's still the best! 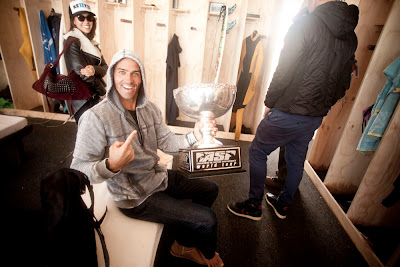 Sad but true, Kelly Slater's eleventh World Title will forever be remembered for the ASP's inexplicable inability to properly calculate the standings and prematurely award him the title. When the news broke on Nov. 4 the surf world reacted with collective bafflement, but to be sure, mistakes happen ... and when it comes to sports, they've happened on a much larger scale. So looking to find some context, here's a few officiating slips that might compare:

On June 2, 2010, Detroit Tiger's pitcher Armando Galarraga throws a perfect game into the bottom of the ninth, then umpire Jim Joyce botches a call that would have been the final out of the game. Galarraga still gets the win, but perfection is denied. "I got a perfect game," Galarraga would tell ESPN.com afterwards. "Maybe it's not in the book, but I'm going to show my son the CD."

There's the famous 1979 Rose Bowl in which the USC and Michigan were locked in a down-to-the-wire battle. Tied at 10 points a piece, USC's Charles White fumbled on the one-yard line, which was then recovered by Michigan. But taking place before the institution of instant replay, officials awarded USC the ball in the end zone for a touchdown. USC won the game 17-10.

Another classic is Scotty Pippen's "phantom foul" from Game Five of the 1994 NBA Eastern Conference Semifinals against the New York Knicks. With Michael Jordan off playing baseball, the weight of the Bulls was on Pippen's shoulders. In the closing seconds of the game Chicago was clinging to a narrow lead when referee Hue Hollins called Pippen for a foul against guard Hubert Davis during an unsuccessful three-point attempt. Davis would make all three shots to win the game, but shortly thereafter a photo would emerge that proved without doubt that Pippen had not committed a foul. Ultimately, the Knicks won the series in Game Seven.

In a 1990 NCAA football game Colorado was playing Missouri. On forth down, with seconds remaining, Buffalo quarterback Charles Johnson spiked the ball to stop the clock. Due to the officials not properly changing the down marker, Johnson received an "extra" down and would go in to score a touchdown and win the game. Colorado went on to win the National Championship that season, but not until years later did Coach Bill McCartney call the mistake "truly remorseful."

Of more legendary note, there's the 1927 Heavyweight Boxing Championship against Gene Tunney and Jack Dempsey. After upsetting Dempsey in their first fight, the two met again on Sept. 27, 1927, at Chicago's Soldier Field. Tunney was clearly winning the fight after six rounds, but in the seventh Dempsey lands a four-punch combo to knock Tunney down. While referee Dave Barry is moving Dempsey to his corner the timekeeper starts to count. When the ref returns to where Tunney is laying he should begin on the count of six, but instead begins counting at one. Tunney stays on the canvas until the count of nine, when he gets up and continues the fight. Instead of the standard 10 seconds, Tunney gets 15 seconds to recover. He would win the fight by an unanimous 10-round decision.

And finally, in 1972 the U.S. and U.S.S.R. met in the Olympic Basketball finals. With just a couple ticks left on the clock America's Doug Collins is fouled hard while cutting to the hoop. He makes the first free throw, which tied the game. Before shooting his second free throw the buzzer goes off, signaling the end of the game. But the Soviets protest, saying they called timeout before the final buzzer sounded and officials add three seconds to the clock. The Soviets inbound the ball and blow their opportunity, but while the American players are celebrating the Secretary General of the International Basketball Federation orders the refs to reset the clock again because they had put the ball into play before the clock had been officially reset. The Soviets win the game with a lay-up. The Americans are enraged and refuse to claim their silver medals, which still sit in a Swiss vault.

So there you have it, was the bad call that delayed Slater's eleventh World Title the worst call in sports history? Hardly. Embarrassing to be sure, but at the end of the day, the right guy won. And while the ASP may have some work to do polishing its image, as they say, no harm, no foul. Slater's still the best, and there's no denying that.