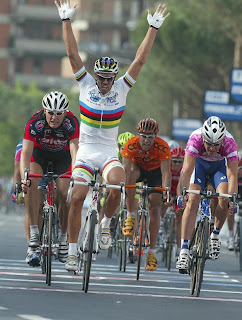 Mario Cipollini has launched a stinging attack on what he called the lack of machismo in modern cycling. The Italian, who recently joined the Katusha team as a consultant, said that he is bemused by the reaction of certain riders in the current peloton to defeat.

“I lived a very different cycling,” Cipollini told L’Equipe. “At the beginning of a sprint, I felt like a gladiator, ready to do anything to keep my place. And when I lost, I wasn’t capable of going to congratulate whoever had beaten me, like Andy Schleck did at the Tour. Me, I’d hate him because he’d taken the bread from my mouth.”

The friendship between Andy Schleck and Alberto Contador is something that Cipollini finds difficult to fathom and he echoed the thoughts of the late Laurent Fignon on the aftermath of the “Chaingate” incident.

“Seeing Schleck and Contador embrace on the Tourmalet after crossing the line and then seeing Contador affectionately pinch Schleck’s cheek during his interview was unreal for me,” Cipollini exclaimed. “Logically, Schleck should have been raging, he had just lost the Tour after all.

“After the chain slip incident on the Port de Balès, he should have attacked the Spaniard day after day, in front of the microphones and on the air too, without giving him time to piss!”

Nor did Alberto Contador escape Cipollini’s criticism. “Machismo is disappearing, I can’t find it in Contador,” he complained. “Contador has the anonymous face of a surveyor or an accountant.”

Cipollini was also left bemused by the reaction of Italian leader Filippo Pozzato at the end of the world championships road race in Geelong.

“Pozzato has just been beaten for third place and a second later he has only one idea in his mind, to congratulate the winner,” Cipollini said incredulously. “What can be going on in his head? Has winning become so incidental at this point that there is no joy or disappointment? Are they only working men now?”

“I read an interview with Umberto Veronesi, a scientist, a reputed oncologist and Minister for Health,” Cipollini continued. “In five hundred years or more, human beings might have both sets of genitalia, male and female. I don’t want this evolution to have started already in cycling…”

Cipollini admitted to being far more expressive when he was defeated and he believes that the riches now on offer to top cyclists mean that the edges have softened on many rivalries.

“At the end of Milan-San Remo in 2003 I threatened to strangle Bernhard Eisel while shaking my fist because he had blocked me with 300 metres to go,” Cipollini recalled. “And I was really frightening. I could see it in the eyes of the spectators.

“I had the meanness in me and it was necessary. The others weren’t going to give me any gifts. In Flanders, on the Koppenberg, the gregari would throw themselves under your wheels to block your route. And if you were in a bad position 3km from the line, Kelly and Vanderaerden would start an echelon straight away to put you in the ditch. That was the rule.”

As well as decrying the lack of machismo in modern cycling, Cipollini also offered his thoughts on the doping problems that have engulfed the sport, both internationally and in his own country. He called for life bans for offenders, and he believes that Ivan Basso’s involvement in Operacion Puerto ought to have marked a sort of “year zero” for Italian cycling.

“I would have saved Basso, who was at the start of the problem,” Cipollini explained. “The manipulator was Fuentes. He was the one who cleaned the blood and kept it. Basso has served as a scapegoat, he has paid and punished himself with humility and came back into the light at the Giro. But all of those who came afterwards knew, and with them, I would be less tolerant. To err is human; to continue is diabolical.”

In spite of his earlier criticism of Contador, Cipollini also expressed his hopes that the Spaniard can prove his innocence.

“I hope Contador manages to prove his good faith, otherwise it would be a big disappointment,” he said. “Cases like Riccò and Di Luca were only a matter of small motors trying to improve their engines. Riccò is not Pantani, but Contador is of another calibre.”
Posted by Recovox at 9:52 AM

Get daily suggestions and methods for making THOUSANDS OF DOLLARS per day ONLINE for FREE.
GET FREE ACCESS INSTANLY