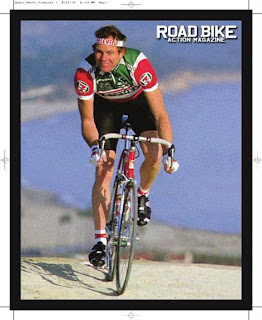 This coming week is the big week for the American cycling industry when we gather in Las Vegas for the annual Interbike trade show. And yeah, it's not open to the public and so yeah, we know it's a tad unfair to talk about Road Bike Action's own Bob Roll showing up at the RBA Booth at 10:00 am on Friday to sign autographs. In recognition of of the injustice, we promise to get a personally autographed poster from the former 7-Eleven rider and current Tour de France commentator to the person who...see contest info below.

George Hincapie At The BMC Booth

Every year the halls of Interbike are filled with cycling stars from today and yesteryear. Besides Bobke at the RBA booth and at the Headsweats booth (#1400), George Hincapie will be signing autographs at the BMC booth (#1883) on Thursday at 1:00.

Win A Personalized GiustaForza Torque Wrench
Cantitoe Road announces that they will be exhibiting at the 2010 Interbike International Trade Expo, taking place 22 September through 24 September in Las Vegas, Nevada. The Cantitoe Road booth #3631, will feature the top selling brands Effetto Mariposa and AXA.

During the show Cantitoe Road will gift a personalized Giustaforza Pro Torque Wrench to one eligible shop owner or employee. Stop by the Cantitoe Road booth #3631 to enter. The winner will be mailed a Giustaforza Pro wrench with their name or personalized message engraved. This giveaway kicks off Cantitoe Road’s fall engraving promotion (beginning at Interbike); purchase any Giustaforza Pro, Standard or Basic and for just $20/per wrench you can have your name or message laser etched on the best torque wrench in the bike biz!

Also at the show, meet the man behind the Giustaforza and Caffélatex products, Alberto De Gioaninni, founder and engineer of Effetto Mariposa. He will be showcasing his newest products, new Giustaforza wrenches and Caffélatex ZOT!, a sealant activator. For more info, turn down Canitoe Road.

'CROSS VEGAS IS WEDNESDAY & OPEN TO THE PUBLIC

Remember when Lance shocked the troops two years ago by making a surprise appearance 'Cross Vegas? Will the Tall Texan make a repeat performance this year?

CrossVegas organizer Brook Watts sounded like a Las Vegas odds maker as he described the field that he has managed to bring together for the September 22nd race. “The winners of the CrossVegas titles are going to come from the best field ever assembled in America. Whether you break it out by national champions attending where we’ve got 8 nations covered. Or if you look at the international rankings we’ve got 3 of the top 10 riders in both the Elite Men and Elite Women categories. If you look at it from another level you’ve got the returning champions from the previous editions of CrossVegas. And then to really top it off you’ve got a dozen “wild card” contenders and any one of those riders could draw an ace on race day!”

Talk about a great problem to have as a race organizer. For the first time in America a gathering of national champions from 8 nations that includes:

Returning are 2009 CrossVegas champions Jamey Driscoll of the U.S. (Cannondale – Cyclocrossworld.com) and Katie Compton (Planet Bike) who also won in 2008. Ryan Trebon (KONA), winner of CrossVegas 2007 and 2008 will be returning. Trebon and Compton are CrossVegas’ only 2-time winners.

Watts concluded by saying, “CrossVegas is fortunate to have an abundance of talented riders who want to start their season in front of the largest crowd in American cross racing. The real winners are sure to be the spectators.” For more info, head to Cross Vegas

Lazer Party Kicks Off Interbike
Lazer Sport NV will be hosting the Lazer Oasiz, a party to welcome the start of the 2010 Interbike trade show, on Tuesday September 21st. Next year Interbike moves to Anaheim California so we bid farewell to Las Vegas in style!

Komosa is being specially imported from Belgium to serve as DJ for the event.

To celebrate the event, and to officially launch the new product for 2011, a special edition Lazer Oasiz helmet will be on display and available for dealers to order at the party.

Taking place on September 23, 2010 at 8pm at Las Palmas Mexican Grill (953 East Sahara Avenue) in Last Vegas, the 2010 GoldSprints World Championships will offer racers in both men's and women's divisions $10,000 in cash and prizes. GoldSprints roller racing pits recreational riders, professional cyclists and industry fans against each other as they aim to complete the fastest 500 and 1,000-meter sprints on track bikes affixed to rollers.

The 2010 GoldSprint World Championships will see the best GoldSprints racers from around the world converge to battle for supremacy. Qualifying rounds, hosted by WestCoast GoldSprints as well as OpenSprints organizers on local levels, start August 1st across cities worldwide and culminate at the 2010 World Championships in Las Vegas. Wild Card entries will be open to Interbike tradeshow attendees and the general public, with wild card qualifying rounds taking place at Kreitler Rollers' Interbike booth #4381 on September 22 and 23.

"Last year's GoldSprints event at Interbike was a screaming success because attendees were so stoked on the Kreitler Cup," said Murphy Mack, who founded WestCoast GoldSprints in 2006. " We're looking forward to the no-holds barred, sweat-inducing, crowd-rousing battle of the first ever GoldSprints World Championships. Be sure to follow us on Twitter @WCGoldSprints to keep up to date on developments prior to the big showdown."