Alberto Vs. Lance in Criterium International 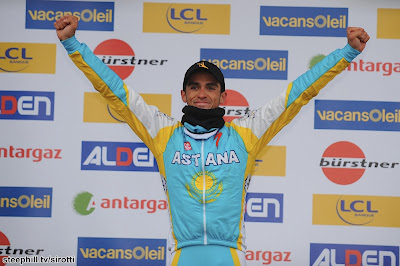 Alberto Contador (Astana) has announced two key changes to his race programme for the next few weeks following his overall victory at Paris-Nice.

Contador had initially planned to ride the Volta a Catalunya (March 22-28) and then the Vuelta a Pais Vasco (April 5-10) but has now decided to cut his number of race days. He will now ride Criterium International (March 27 and 28) and the Vuelta a Castilla y Leon (April 14-18).

The changes mean he will face Tour de France rival and former teammate Lance Armstrong at the Criterium International. It will be the first time the two have raced against each other since their acrimonious split last season.

"I’ve had very good results in the first two races, my preparation is proceeding well, so we decided to change the calendar, to seek a less tiring race programme for me and for my team,” Contador said in a statement.

“Criterium really suits my racing characteristics and I’m also want to ride it because it prestigious race. The Vuelta a Castilla y Leon is a special race for me and this year’s change of dates helps me before going to the Classics, where I especially hope to gain experience. I'm excited to ride them because they’re special, but I know that there are riders who have a better chance of winning.”

“I’m sacrificing Catalonia and the Tour of the Basque Country because my preparation is going very well and do not want to risk doing too much. Now I'll also have the opportunity to meet other team riders that will be in the Tour team, like Vinokourov”.

The Astana team also announced that it will not ride this year’s Paris-Roubaix. The team relinquished its place, claiming it does not have specialist riders, although it promised to ride the French cobbled classic in 2011.
Posted by Recovox at 10:54 AM