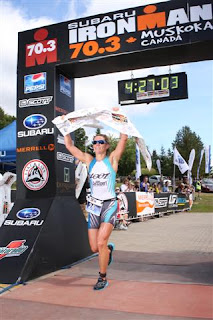 
As she heads to Kona for her first Ironman, Mirinda Carfrae will bear the title of this year's dark horse contender. As the 2007 Foster Grant Ironman 70.3 world champion, Carfrae hopes to duplicate the feats of two other Clearwater champions who have made impressive Kona debuts. Both Craig Alexander and Samantha McGlone finished second in their first trips to the Ford Ironman World Championship.

“This whole year has been in preparation for Kona,” Carfrae says. “I want to go there fit and I want to give it my best shot. Having said that, it'll be my first Ironman and my first time racing in Kona and anything can happen. So many athletes have gone there and crumbled. I hope to not be one of those athletes - I'll go there and give it my best shot. If I don't have a good day, I'll no doubt learn a ton. I plan to go there and race for at least 10 years – this is just the start.”

Carfrae is all-too-aware of the expectations that come for her Kona debut thanks to her win in Clearwater two years ago and her incredible string of Ironman 70.3 wins this season. Other than a second in St. Croix, Carfrae has been virtually unbeatable over the distance with wins at Eagleman, Calgary, California and Muskoka.

“There's expectations,” she says. “I expect to do well. I try to not put too much pressure on myself, though. I'm in great shape and I'm racing better than I ever have. But anything can go wrong. Nutrition, I don't know how my body will handle the heat for that long – lots of things.”

The 28-year-old has been chomping at the bit to compete in an Ironman, but has been patient as she's waited for the right time to give the longer distance a shot. Carfrae competed on the ITU circuit for years but wasn't as competitive as she probably should have been because she couldn't get her swimming to the point where she could come out of the water with the lead group. She then started to compete in the United States in non-drafting Olympic distance events and Ironman 70.3 races. The creation of the Foster Grant Ironman World Championship 70.3 gave her the opportunity to make a living and compete at a world championship without having to step up to the full Ironman distance.

“Kona's something I've wanted to do for a long time – before Chrissie was winning and back in the days when Natascha was unbeatable,” she says. “I would look at the race and say I want to do it. The last few years it's been hard to sit on the sidelines and watch the race, but I felt like I was a bit young. I wanted to make sure my body was strong enough to handle the distance. I'm all about longevity and looking after my body so I can race when I'm in my peak.”

Now Carfrae spends much of her year living in Boulder, Colorado as she travels around North America competing in (and usually winning) various Ironman 70.3 events. She says Boulder now feels like a “home away from home,” making the long time away from family and friends in Australia a little easier to take.

The last six weeks have been spent in California with her coach Siri Lindley, where she's been putting in lots of hard training for Kona. Last weekend's race served as one final test before her Ironman debut – one that she passed with flying colors as she ran away from the rest of the women's field to chalk up yet another Ironman 70.3 win.

Sure, the Ford Ironman World Championshp will likely be quite a learning experience for Carfrae, but like those other former Ironman 70.3 world champs she's following to Kona, she's one athlete we'll be watching in Kona next month.
Posted by Recovox at 8:22 PM