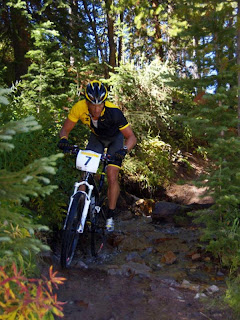 Lance Armstrong showed his versatility by taking the victory in the professional men's cross country race at Colorado's "Blast the Mass" mountain bike race in Snowmass, Colorado on Saturday.

Armstrong is no stranger to the dirt, having made his comeback to competitive cycling last summer in the Leadville Trail 100. The regional off-road pros hoped to have advantage on the technical 23-mile course that featured 4700 feet of climbing, but were no match for the seven-time Tour de France champion.

"Believe it or not, Lance is actually great on his mountain bike, even on a technical course," said Jay Henry, the Mountain States Cup series leader, before the event.

"Assuming he has good fitness after coming off of the Tour, he will do just fine. I think, however, being the State Championships, the Colorado guys have got to pick it up a bit and certainly not let a Texan beat them."

Armstrong's attendance at the regional mountain bike events have given them a big boost in importance.

"It's great when he comes out and attends these races. It brings attention and a lot more respect. He doesn't walk away with victory, he is battling for it. It proves the legitamacy of mountain biking," said Henry.
Posted by Recovox at 4:43 PM