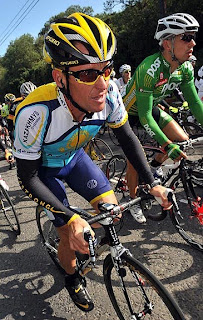 Media and fans swarmed Lance Armstrong before the start of the Tour of Ireland, which kicked off at the Ritz-Carlton in Powerscourt, just south of Dublin. The hundreds of people pressing in on the Tour de France star confirmed what Leadville Trail 100 organizers already knew: Armstrong brings the crowds.

“The fact that we had to reduce the race by two days is testament to the difficulties of the economic market,” McQuaid said. “He means so much to this race; he brings it to another level. The past two years we’ve had very good global coverage. But he has put a spotlight on it like pretty much no other athlete could.”

Once Armstrong confirmed his plans to attend, race officials contacted the Irish government about the possibility of the LiveStrong Global Cancer Summit.

Armstrong said that while there is no direct relationship between the race and the three-day cancer meeting, “we used this great event to springboard into the global summit.”

“It’s probably safe to say that the summit wouldn’t have happened without the Tour of Ireland,” Armstrong said. “For us it worked out well. We have a lot of great support from the people in Dublin. It all starts here. We get to race for three days and then stick around to talk about this global burden for three more.”

Armstrong commended the country for its cycling heritage.

“Ireland may not be one of the main cycling countries in Europe but there’s a lot of cycling history here,” he said. “Look at the greats who have come out of Ireland, Currently the leader of cycling is an Irishman. There is plenty of Irish history in cycling.”

Like other riders, Armstrong expects the 2009 Tour of Ireland to come down to the circuits over St. Patrick’s Hill on Sunday in Cork.
“We’ll see what happens,” he said. “I haven’t been doing a lot of specific road work and so hopefully I’ll feel better as the days go on. And adjust to the changes of riding a road bike and riding at race pace. It’ll all comes down to the last day. Somebody will probably make a separation, but probably not me.”

“I was racing Leadville last weekend on the mountain bike, which is a slightly different dynamic,” he said. “Now all the travel. From Colorado to Texas, then Scotland, Norway and then here. It’s been an eventful week.”

As for his own chances on St. Patrick’s?

“It’s completely straight and steep. It’s very straightforward. I have two days to train for it, so we’ll see when we get there.”
Posted by Recovox at 8:12 PM