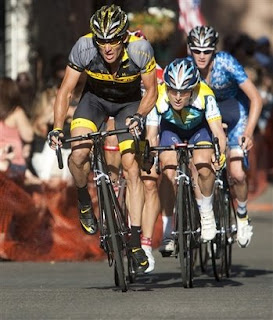 Today started the same as any other day of racing, with breakfast followed by some stretching. Of course, today's race was in Nevada City, Calif., and we were waking up in Aspen, Colo., which meant this day was going to be different from most race mornings from the moment we left the house.

After loading up the cars in Aspen, we headed to the airport, which is only 10 minutes away. When we got to the airport, they opened up the gate for us and we drove straight up to the plane. That's right, we were flying to California on a private plane - something a little different than the usual transportation!

With the people, bikes, and a serious amount of gear loaded up in the eight-passenger jet, we were on our way to California. It was going to be an hour and 30 minute flight each way, which would not only end up saving us an incredible amount of travel time (about two days worth), but also keep the general wear and tear of travel to a minimum. Also, it got us back to Aspen tonight right after the race, where we are able to sleep in familiar beds and be back on our high-altitude training plan first thing Monday morning, in preparation for the upcoming Tour de France in less then two weeks time.

Lance Armstrong had the whole family along for the trip, with his girlfriend, Anna; twin girls, Grace and Bella; son Luke; and their new baby, Max. Immediately as the kids boarded the plane, you could see the transformation that all fathers make, going from just one of the guys hanging out with the boys, to a dad in charge of keeping the peace. The familiar transition reminded me hugely of my own kids. Along with the Armstrong family were Levi Leipheimer, Dave Bolch (Lance's main man, who keeps life rolling along smoothly), and, of course, me. When the plane landed in California, we loaded up in a couple Suburbans and headed straight to our host family house for the day, located conveniently right on the course of the Nevada City Classic.

With the first half of the travel done it was time to get down to business. The course is known as one of the hardest in the country and today it didn't disappoint. The thousands of fans lining the course were treated to a serious show. The fireworks started on the first lap, with attacks immediately lighting up the race. Unfortunately, I was feeling the lack of racing form right away, as the legs just were not firing the same as usual, and today's race wasn't going to give me any time to ease them back in.

Levi went on the third lap, following an attack from another rider, and nobody could respond. In the next lap, some riders attacked and Lance was right on the wheel following the move. I was just behind in a third group of riders trying to get across to Levi. In the meantime, Lance was riding guys off his group with each turn of the pedals. As he caught up to Levi only one rider was capable of staying with Levi and Lance. They immediately went to work in their own two-man team time trial, leaving a wake of destruction behind them. I leap-frogged through the carnage, going from rider to rider, until I finally caught up with two strong guys who were ready to go. The three of us stayed together until Levi and Lance lapped us, with only six or seven laps remaining in the race. Right away I talked with Lance about attacking Ben Jacques-Maynes, the only rider who had been able to stay with Lance and Levi. He was game for putting the hammer down yet again, and the next time we hit the climb he took off like a bullet.

There was no response from the group as Lance's lead grew bigger and bigger with each passing lap. Ben was trying with everything he had left to bring Lance back, but the only direct effect was that our group was getting smaller as the riders that had been lapped were giving up the fight.

Alone up front, Lance was putting on a display of power that no one could respond to, and the crowd lining the course was going crazy, loving every minute of the show. Everyone knew that they were seeing a preview of what could be ahead at next month's Tour de France.

Lance rode across the finish line solo, which any rider will tell you is the best way to win. Levi finished third, and I think I was fifth, but with all the lapped riders it was getting hard to tell who was where.

As soon as we could, we loaded the cars back up and headed back to the airport for the trip back to Aspen. It was a great return trip, as morale was high. The day was a success as Lance showed that his form is fantastic, Levi showed that his is still going strong and after only one good week of training since breaking my leg, I have nothing to complain about.

Now, hopefully, it is off to France and the big show! Thanks for reading. Until next time...
Posted by Recovox at 12:41 AM