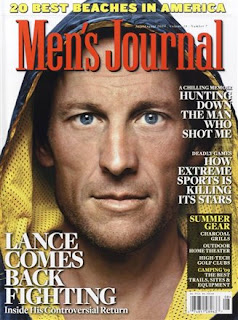 I am writing in response to the article written by Reed Albergotti which inaccurately and ineptly described what Mr. Albergotti perceived as an ongoing feud between Greg LeMond and me. In general, the article fell far short of minimum journalistic standards on many levels. The article was egregiously one-sided, omitted essential material facts and contained many facts which Mr. Albergotti knew, or should have known, were either false or highly questionable.

As reflected in the LeMond sworn testimony I furnished you, the conversation of August 1, 2001, described by Albergotti was not during LeMond's bike ride with George Mount. Both LeMond and his wife who claims she took notes of the conversation, testified that they were in their car on the way home from the Minneapolis airport during the call. During the call itself, LeMond told me he was on a lake somewhere in Minnesota. While LeMond's whereabouts is of no concern to me or presumably anyone else, it is illustrative of the absurdity of LeMond's claims in a wide range of matters.

Initially, I cannot overemphasize the fact that there is no feud between LeMond and me. I have had no contact with him and certainly have much more productive work to do than to feud with Greg LeMond. His lawsuit concerns a business relationship with Trek, not me. The "battle" has not been "playing out in federal court"; to the contrary, I have not been involved in any such proceedings because I know nothing about his relationship or dispute with Trek other than some initial press reports when he filed his case some time ago.

Had I been responsible for Trek's conduct, I would be a defendant in the case; had I "maliciously interfered" with any of his business interests or done anything to injure LeMond, his brand or his reputation, I would be a defendant in the case. I am not. The "explosive charges" in LeMond's court papers were obviously included purely for effect, as there is no basis to anything he has said about me in some time. Why he chooses to write and talk about me is anybody¹s guess.

In short, Greg LeMond is involved in several "feuds" - primarily with business relationships which have gone sour. He was sued by LifeFitness just last week in an effort to terminate a contract for his exercise bicycle, which has proven defective and apparently caused LifeFitness a great deal of money and inconvenience. He has also been involved in lawsuits to terminate relationships with his long-time manager and other partnership entities. He may be in a feud with me, but I am not involved in a feud with him; I am focused on cancer survivors, their families, and my return to cycling.