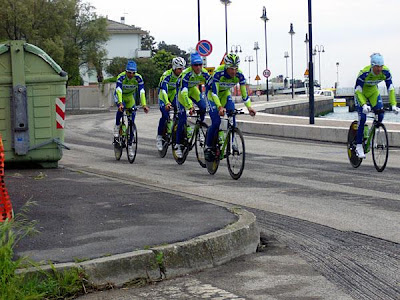 The Italian Liquigas team previewed the Giro d'Italia's stage 1 team time trial in Venice yesterday. Eight of the nine potential Giro riders inspected the parcours, with Alessandro Vanotti the only absent rider due to sickness.

The opening stage is an out-and-back course along the Lido, 20.5 kilometres in length. "We did the parcours three times, thanks to the police who closed the course off," Ivan Basso told us.

Basso will check out stages four and five, the first hard mountain stages, as well.

The team has not announced its final roster yet for the three-week race from May 9 to 31.
Posted by Recovox at 9:24 AM