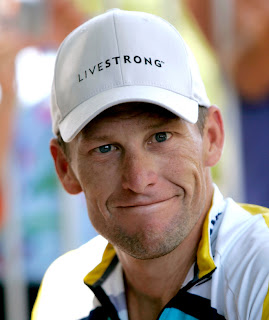 I’m a Lance apologist. I ride bikes because of Lance. I can still remember the smell of eucalyptus in the air, the foggy morning I rode my Specialized Allez to Santa Barbara and then kept going, smiling at all the descents and happily suffering on all the climbs. I fell in love with bicycles. I’m not that fast yet, but every time I get on a bike I’m glad I did. I got on a bike because I was inspired by Lance. Not Marco Pantani, not Greg LeMond, not Robert Millar, Stephen Roche, Miguel Indurain, Eddie Merckx. Nope. Lance.

Last week, after a tough family day, I grabbed my bike and did hill repeats on a steep one-mile climb in town until 8 p.m. It was dark, it’s a sleepy country road, it was dangerous, but I just needed to ride. I got home and whatever it was that was bothering me got left on that road in the dark. I can’t remember how many times I did that climb. Seven? Eight?

Last month, at the wind tunnel in San Diego, I got a chance to be face to face with Lance and watch him work. He was intense, humble, focused and kind—until someone asked him about Linus Gerdemann’s negative comments about his return to racing. Then his eyes changed, he took a deep breath, his tone was altered and he made it very clear to the five of us in that room that when he rolls up to race in 2009, he intends to win, and that Gerdemann “better hope he doesn’t get into a breakaway with me…” It is clear to me now that Lance’s intention this year is to win. And for what? To satisfy his own ego? Maybe. But there’s another side to the story that should be told: in 1996 Lance Armstrong was hours away from death, shriveled up, bald, cotton-mouthed, sunken-eyed, scared, alone and dreaming.

Suited up in hospital gowns, vomiting from chemotherapy, stitches in his skull and body, wondering if he would stay alive and heal from the cancer that was trying to kill him.

Do you remember that?

I look at this year ahead and I think mostly about the 11 to 12 thousand children diagnosed with cancer every year in the U.S. alone and the 1600 or more who die. Or, I think about the 10.9 million people diagnosed worldwide and the 24.5 million who have gotten the news in the last five years. The news that they have a disease that could kill them. No more cereal in the morning. Espresso after dinner. Hugs from your friends or kids. So when I hear Linus Gerdemann, various French and German journalists and even some American skeptics play down the importance of Lance’s journey back to racing, I imagine a kid or an adult in a lonely hospital room, making deals with God. I picture a skinny Lance, on the brink of death, and then I imagine the joy, the vicarious adrenaline rush, and the smile that will be on that kid or that man or woman as they watch Lance climb in the Giro d’Italia, or attack Linus Gerdemann on the Tourmalet at the Tour de France, giving them hope-even for just a few minutes—that they can heal and they can succeed. Is Lance perfect? No. Is he a modern-day hero who has the ability to inspire and encourage millions of people to get through another day? Yes.

You can have your Ricardo Ricco’s or some other new racer of the week. They race for money and fame and ego, like most of us. Lance is different. He’s racing for people who are in hospital rooms, throwing up their Jell-O and giving their husbands or wives a hug good-night, knowing it could be the last time they touch.

They will be cheering for him from hospital rooms around the world, and that transcends cycling. I hope I’m there when he goes on to win an eighth Tour de France. I can almost hear the shouts of hope bouncing off those thin hospital windows and traveling down the staircases to the stale hospital cafeterias in cancer wards around the world.

Too much Lance? I don’t think so.

Brad Roe is the editor of RBA click on the title link to learn more.
Posted by Recovox at 8:33 PM