Popovych - Back Home Again At Astana 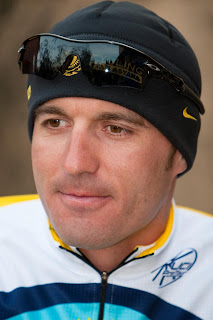 Just having turned 29, Popovych lives in Quaratta, Italy in Tuscany with his wife Cindy and two year old son Dylan. Although Popovych speaks good english, and we don't speak Ukranian, he is most comfortable speaking Italian. Relaxed and smiling as usual, Yaroslav was wearing his Ukraine t-shirt and tracksuit bottoms with his spiky hairdo when we caught up with him at Team Astana's training camp.

Road Bike Action: Hi Yaroslav! How is it going with your surprise return to Astana from Silence-Lotto? You left Discovery Channel after three years from to 2005-07 before Johan took over Astana. Now you are back.

Yaroslav Popovych: Yes, well...first I've gotta say last season (2008) wasn't like I had hoped. Everybody could see I just didn't have the form I wanted, and most of all me! The year started out well and I was third at Paris-Nice, but when the Tour came around, my form wasn't what I wanted. So I just did the best I could to help Cadel at the Tour and had hoped to ride better but you know, sometimes things just don't come together."

RBA: So how does it feel to be at Astana?

YP: Oh, it's great! Just like like coming home. You know, I was at Discovery Channel for three years and in many ways, it feels like almost the same team. Sure there are some different riders, but the staff is almost all the same and there are a lot of new guys from Kazakhstan who speak Russian. We won two Tour with Lance and Alberto and there are great teammates like Chechu (Rubiera), Benjamin Noval and Paulinho. We had a great team. After I left, I still kept good relations with Johan and Astana and even after I left they would say "oh come back to us" but I told them I had a contract with Silence-Lotto. And of course there is Johan! Johan’s organization is the perfect fit for me. He is one of the few people I know that has successfully been able to manage both individual and team goals.”

RBA: You must still have special memories from that day at Courchevel in the 2005 Tour de France when you were with Lance? We could see him talking to you on the final climb...what was he saying?

YP: (Laughs) Oh I made a mistake there! (Lance) was saying was to wind it up and then pull off. That was my first year riding with Lance and I hadn't ridden with him that much. So there was a lot of emotion for me and I went too hard and gapped him! But then I understood what to do...

RBA: What about Lance's comeback? What do you think of that?

YP: I think it's great...Lance is incredible to work with, to ride for. So I think he will do great. He is really fit and has that same mental edge like when he was racing.

RBA: So what does your race program look like for 2009?

YP: Well one thing is sure, there are always clear objectives, and clear roles on the team because of the way Johan runs things. So I will be riding the Tour Of California and then be on a program with Lance to support him at the Giro d'Italia and then hopefully ride the Tour de France.

RBA: Yaroslav, why did you leave Silence-Lotto so abruptly? It was a big surprise for many people.

YP: It was kind of a surprise for me too! I had a 1 year deal with them and a two year option for renewal. The initial indications from Silence-Lotto were positive, and after the Tour I was expecting to have my option picked up through 2010. But I kept waiting and waiting and waiting and nothing came...it was 'wait another week, another week'. So eventually, after the Giro di Lombardia, I got an offer from Silence-Lotto, but it was for a lot less than the two option years were supposed to be for. At that point it was really late in the season and it was very hard to find a good contract for 2009, with all the problems going on in cycling. So I called Johan and luckily he had a place for me. We worked out a good deal and I am happy to be back home with the guys at Astana.

RBA: Do you still keep in touch with your friend Ernesto Colnago?

YP: Oh yes...I talk to him often, about once a month. When I am in the Milano area, I almost always stop at his factory to say hello. Without his help at the beginning, I could not have done so much...

Popovych and his Astana teammates wrap up their training camp in Santa Rosa, California, then the Ukranian rider will ride his first race of the 2009 season, the Tour of California, starting Feb. 14. Once the California tour is over, Popo will return to his home in Italy and continue his preparations for the rest of the season.
Posted by Recovox at 11:19 AM