Battle Of The Bulge 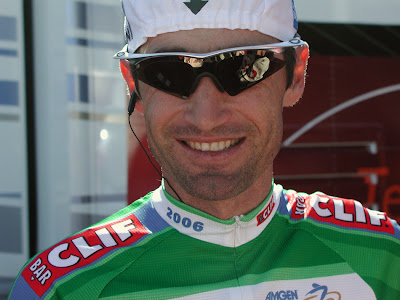 For all of you who have made new year's resolutions about losing weight, I think that we should dive into what professional cyclists do in the off-season to keep the pounds off, yet at the same time, enjoy some of the foods and beverages that they restrict themselves from consuming during the season.

Over the past 10 years, weight has become the buzzword in all levels of cycling. Gone are the days when we used to eat as much as we could at the table because we thought that the more we eat, the more energy we have for the next day's training or race. The overall goal of every cyclist is to have the best power to weight ratio as possible. A good rider in the peloton has a ratio of 6 watts/kg, a great rider has 6.5 watts/kg and the best can have over 7watts/kg at threshold. But while being lean is important, riders can go too far and actually start to lose power.

This wasn't always the case, however. I remember a rider on my first team telling me, "if you can walk out of the restaurant comfortably, you haven't eaten enough!" Although I never totally agreed with "rolling" yourself out after a meal, many riders did just that. It was a total shock to me when I heard the word "regime" when I started with Motorola. I don't know where it came from exactly, but I would assume that it was handed down from Sean Yates to us young Americans on the team. Regime was just another way to say "I am serious now, I am on a diet" and became a part of our everyday lingo.

A rider's off-season weight is one of the first subjects to come up when greeting a teammate or boss at the first camp of the new season. The conversation never lasts longer than a few sentences before weight comes to the forefront. It used to drive me nuts because I was never the leanest guy and knew that it was just a matter of time before it was brought up. I had a director that, as you were shaking hands, would grab your arm or waist and do his version of the fat caliper test! He wouldn't even say anything, but you could tell by the look on his face if he was happy or if you had some work to do.

Of course the easiest way to get around the weight-gain issue is not to put it on in the first place, but this is easier said than done. After a long season, riders enjoy taking a break from what they have been eating the entire year. Vacations, good times with family and friends, watching football, drinking beer, and not training as much take priority over the "regime" that they have been on for the last 10 months.

How riders cope with this period of freedom varies. There have been documented cases ranging from riders weighing everything that they put in their mouth to the ones that stuff their face with enough strudel to feed a small army, but I always preferred to stay in the "gray" zone. Discipline is the key here, if you understand and accept what you are putting in your mouth and the advantages or consequences that come with those decisions, then no matter what choice you make, ENJOY IT! The worst thing you can do is eat or drink something that you obviously craved just to rake yourself over the coals a few minutes after consuming it. This constant calculation and evaluation of what is eaten or drunk is part of every athlete's daily struggle.

I am often asked what professional cyclists do in the start of the season to lose weight. Well, the answer to that depends on how much weight they put on during the off-season. Most riders are very professional and don't put on more than 8 pounds, and they will lose half of that weight during the first training camp. These riders have very little to worry about and can shed those extra pounds by cutting out alcohol or desserts and paying a little attention to the calories that they consume at camp. The riders that gained more than that will have a little bit more work to do.

I have heard stories about riders who gain so much weight in the winter that they can't even fit into the cycling clothes that the team gives them at camp. For riders like this, it is important that they realize that it will take just as long to lose this weight as it took to put it on and maybe more. Many of these riders who let themselves go in the winter are not patient enough to lose this weight in the correct way and wind up doing things that are not only bad for their form, but also their overall health.

As their leaner teammates are starting up with some intensity, the riders who put on more weight often make the mistake of doing ultra-long "fat burning" rides with the hope that they will lose the weight more quickly. I have witnessed riders doing 6-8hr rides at 30kph with little or no food before or during the rides. This may sound like a logical technique, but it does not work very often. This technique can lead to major mental and physical fatigue as well as depression. It takes a very strong head to go from eating whatever it was that made them gain all this weight in the first place to eating almost nothing at all. This is a desperate attempt at a "quick fix" and can lead to bigger problems down the road.

The problem with all this emphasis on power to weight ratios is that many riders become obsessive about this and go to extremes. The worst case scenario is that they will go as far as being anorexic or bulimic because of the pressure they, or others put on them to be skinny. Sometimes I have heard riders sounding like female Hollywood stars when talking about their weight! I do feel that there is a serious body/self-image problem in the peloton now that I am no longer a part of it. I say that because if a rider who weighs 69kg with 6.2% body fat thinks of himself as "fat", what does he think of normal people on the street?

Eat, train, be happy, and do the best that you can with what you have. After all, this is a sport and you should enjoy all aspects of it. It is alright to push the limits and be the best you can be, but stay in the "gray" area, you will thank me later....I hope!