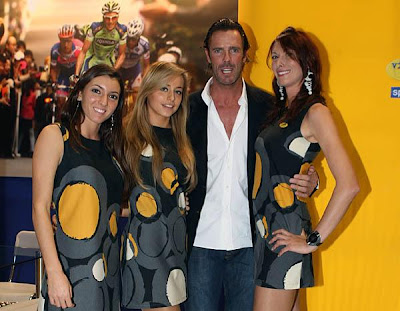 Former World Champion Mario Cipollini has joined forces with new team ISD. The 41 year-old will act as a consultant for the Ukrainian-backed Italian team of Luca Scinto and Angelo Citracca, according to La Gazzetta dello Sport

"We have created a lot of similar ideas. You will see me some times in the team car or training with the riders," Cipollini said.

Cipollini won many big races, including the 2002 Milano-Sanremo and World Championships, before retiring in 2005. He worked as a consultant for Team Liquigas after retirement and did the same for Rock Racing during his brief comeback last spring, which included a third behind Tom Boonen in stage two of the Tour of California.

"It was an experience," he said of working with Michael Ball's Team Rock Racing. "Every great athlete wants to feel it, even after retiring. I understand the desire of [Lance] Armstrong to return to the top. I took the post at Rock Racing immediately, but in America I could not give the contributions that I would have liked to."

Scinto and Citracca were to have extra funding for Cipollini and the team from Danieli, but the company backed out of its offer to sponsor the Professional Continental team, according to the newspaper. It was set to provide one million in budget for the team.

"The team will have 20 riders. The leader will be [Giovanni] Visconti, but also look out for [Dmitry] Grabovskiy and [Andriy] Grivko."
Posted by Recovox at 9:04 AM