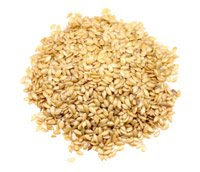 Its high content of alpha linolenic acids has made the ancient flax seed become our modern miracle food. Alpha linolenic acid is a type of plant-derived omega 3 fatty acid, similar to those found in fish such as salmon. Benefits of flax seed as shown in many studies include lowering total cholesterol and LDL cholesterol (the Bad cholesterol) levels. Other benefits show that flax seed may also help lower blood triglyceride and blood pressure. It may also keep platelets from becoming sticky therefore reducing the risk of a heart attack.

Other Benefits of Flax seed

Aside from alpha linolenic acid, flax seed is rich in lignan. Lignan is a type phytoestrogen (antioxidant) and also provides fiber. Researches reveal that lignan in flax seed shows a lot of promise in fighting disease -- including a possible role in cancer prevention especially breast cancer. It is thought that lignan metabolites can bind to estrogen receptors, hence inhibiting the onset of estrogen-stimulated breast cancer.