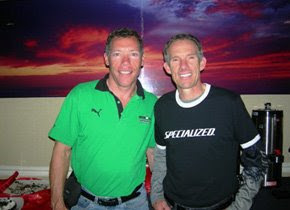 Many describe Ned Overend as a living legend. The first ever world mountain bike champion dominated his sport in its fledgling years. Like the man who dominated Ironman through its early days, Dave Scott, Overend remained incredibly competitive up through his 40s - well, actually, anyone who's had to race against Overend recently will probably tell you that he remains competitive now, just a few months shy of his 53rd birthday.

“I was a runner in high school,” says Overend. “I was Bob Babbitt’s room mate. I met Bob on a rock climbing trip in Baja Mexico. I was working at San Diego Suzuki, he was a schoolteacher. We decided to rent a place together on Pacific Beach. We used to do events likes Tug’s Pier Swim. Then, one day, Bob saw the article in Sports Illustrated about Tom Warren winning the Ironman. Tom used to own Tug’s Tavern, so he said, let’s do this. I thought it was absurd, but I’d never been to Hawaii.”

It is ironic that the man responsible for many of mountain biking’s most incredible innovations arrived in Honolulu for his first Ironman in 1980 … well, let’s say without the best equipment.

“Bob was off the deep end,” Overend laughs. “He had a radio taped to his handlebars. I was wearing Jack Purcell tennis shoes. Since I thought those black shorts were kind of funky looking, I wore khaki stretch shorts with pockets.”

Things didn’t exactly go smoothly for Overend through the bike, either.

“My wife, she was my girlfriend at the time, she was my support staff. Somehow we got disconnected. I ended up doing the first 75 miles of the bike without support. I was stopping on the side of the road and filling my water bottle with people’s garden hoses.”

Despite his running background (Overend had run a 2:28 marathon before heading to Hawaii), the swim and the bike in the Ironman turned Overend “from a runner to a walker” but, despite his trials and tribulations, he would eventually finish 24th.

Overend would compete in one more Ironman, that on the big Island in 1981. After that he moved to Durango, Colorado, and got into trail running, continued to compete in triathlone and eventually turned to cycling. The rest has become a very storied history.

“It’s come a long way,” Overend says of Ironman. I would say so has Overend, but since he’s threatening to get back into triathlon racing again at some point, I’m guessing that there will be more to be written of this legend at some point. Just two years ago Overend won the prestigious Mount Evans Hill Climb – no matter what he might try to tell you about it getting harder to be in shape at his age, don’t believe a word of it.

Despite his success, despite the fact that people can’t help but clamor around him, desperate for a picture or an autograph, Overend remains one of the most modest and understated people on the planet. He represents himself and his sport(s) in a way that we all can learn from. On top of that, like his old room mate Bob Babbitt, he’s an incredibly nice guy.

Sorry to all of you in the 50-54 age group – I’m going to keep working on getting him to try and qualify for Clearwater!

You can reach Kevin Mackinnon at kevin@ironman.com
Posted by Recovox at 10:44 AM