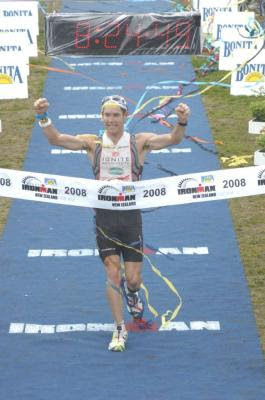 After winning here in exciting fashion a year ago, Cameron Brown�s luck went completely awry. Actually, it was even before the race last year that things started to go wrong. A flu bug almost sidelined him from getting his sixth Ironman New Zealand win. A foot injury prevented him from defending his Frankfurter Sparkasse Ironman European Championship title, then he ended up sick again in Kona � this time he couldn�t pull out any magic and had to drop out.

It looked like Brown would need some luck to get the win here today, for no other reason than the field assembled here seemed very likely to challenge him right to the line.

As expected, Kieran Doe pushed through the swim and on the bike, trying to get a big lead. Luke Bell seemed to be staying close to Brown through the early going, too � seeming to indicate we could be in for a repeat of last year�s dramatic marathon.

None of that happened, though. Bell would drop out, never seeming to recover from a four-minute drafting penalty that put him well back off the bike.

Doe�s lead, which started at seven minutes off the bike, was gone by the halfway point of the marathon.

It was all over by then. Frederik Van Lierde would provide some excitement with his Ironman debut second place finish, but he never challenged Brown as the Kiwi got his seventh title here in Taupo.

Luck really didn�t have much to do with it, though. Brown was simply too good. It�s nice to see his luck change a bit, though!