'We cannot change the past, we can only influence the future' 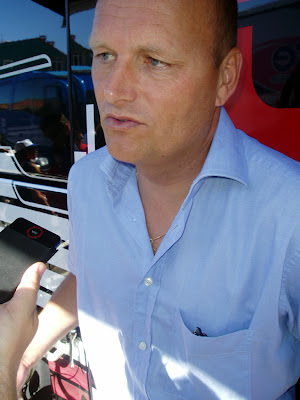 Bjarne Riis's self-imposed exile is over and the controversial Dane returned to his spot behind wheel of the team car at Team CSC following weeks of seclusion in the wake of his admission that he doped on the way to his 1996 Tour de France victory.

It's Riis's first race appearance since deciding to skip the 2007 Tour following a dramatic confessions that he used the banned blood booster EPO and other illegal performance-enhancing drugs during his racing career.

"I considered leaving the sport. It was a very difficult period for me, but I took my responsibility," Riis said outside the Team CSC bus Wednesday morning. "Why should I quit? We have the best team in the world. We are on the right way and we're doing what we should do. I also have responsibility for 75 people who work for me and 75 families. Why should I throw that all away?"

The Dane quietly arrived at the Vuelta a España two days ago and will remain through Monday's rest day. He's so far try to avoid the limelight, but he was spotted by journalists ahead of the start of Wednesday's stage.

"I want to be here. It's good to be back with the team," Riis told VeloNews. "I missed the team, but I needed some time to think about the future."

Riis, who owns Team CSC and also serves as the team's lead sport director, has been the lightning rod for controversy since he became the first Tour winner to publicly confess he used doping products during his racing career.

In a press conference in late May, Riis admitted he took EPO, human growth hormone and corticoids during his professional career. His career highlight was victory in the 1996 Tour, a triumph that's now been erased from Tour history books.

"It was the right decision for me and I'm happy that I did," Riis said of his public confession. "At the beginning, it was hard, but it was the best thing for the team and for me."

Riis's admission capped what was a flood of confessions from former members of the Telekom team during its hey-day in the mid-to-late 1990s.

Other riders such as Christian Henn, Udo Bolts and Rolf Aldag also confessed to doping and a pair of former Telekom team doctors also admitted to administering doping products to team riders.

Reaction was strong, especially from Tour officials who said they no longer considered Riis the rightful owner of the 1996 maillot jaune.

In the wake of mostly negative reaction, Riis felt his presence at this year's Tour would be too distracting for his team and left after the opening weekend in London.

He insisted that it was his decision to leave the Tour and that he wasn't pressured by race officials to make a hasty exit.

Instead of following the Tour every day, Riis took time to reflect on his past and his future.

"It was difficult. I was tired. I had to take some time off. It was necessary," he said. "Now I feel comfortable to come back. I feel fresh and I am optimistic about the future."

Riis is hopeful the ghosts of his doping past will not haunt the team's future.

Ironically, Riis has become one of the strongest spokesmen against doping in cycling.

"I am very positive about the future. We have the strongest anti-doping program in sport. We've been able to show everyone that we can win races clean," Riis said. "We had a meeting last week with 12 teams. We all agreed that we want make a strong anti-doping program that's very close to ours right now. This is a great commitment for the sport. That doesn't mean there won't be cases and scandals, because there are always stupid riders."
Posted by Recovox at 12:23 PM