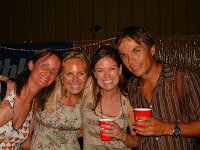 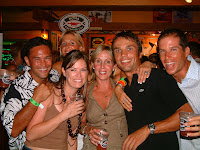 10. Challenge Roth
Located in the heart of Bavaria in southwest Germany, the Challenge race organizers host one of the world's largest iron-distance races and post-race parties to complement this class-A race. Even if you race, your tired legs will find themselves hobbling to the finish line for one of the best finish line parties around. Don't miss the brunch the following morning in which everyone, including the race winners, attend complete with chanting, singing, and indulging in tasty Bavarian cuisine.

8. St. Anthony's
The party starts after the race in the beer tents located only yards from the finish line. Sit down and chat with local stars like Jeff Cuddeback or one of the scores of pros who use this season opening classic as a cobweb blaster. Later in the afternoon, the St. Pete's Mad Dog's host a party at a bed and breakfast near Vinoy Park complete with swimming pool, great food, great company and near the local bar scene.

7. Rocky Point
This Spring Break destination is taken over by triathletes who want a fun-filled season opening race in early May. This race attracts a mix bag of participants, usually from the western states, looking for an easy-on-the-wallet adventure. Finishers are greeted at the finish line with a race sponsored Tecate cold one.

6. Xterra Tahoe
Located at the Hyatt Regency in Incline Village on the banks of Lake Tahoe, the Xterra crowd floods the bar after the awards ceremony. Filled with small casinos, athletes dance the night away before filing out to a host of after parties in surrounding condo units.

5. St. Croix
This island gem starts with drinks and dinner at the awards ceremony at the Divanni Casino followed by house parties at one or more of the local home stay houses. The buzz can begin as early as post-race with a sailboat tour ride out to the neighboring Buck Island.

4. Pucon Half-Iron
It is summertime in the Southern Hemisphere and this internationally renowned race is followed by one of the best bashes around. This race week is one long party, including the post-race festivities which could involve hitch hike rides on motorbikes and pickup trucks and drinking the local favorite, Piscola Sour. The following day, Ironman legend Ken Glah serves up the opportunity to trek up Volcano Villarica, which shadows the race course.

3. Wildflower
This captive environment holds athletes in the confines of inland northern California complete with industry folks, thousands of camping athletes, and the local Cal Poly college crowd show all type-A triathletes how to kick back college-style. If you find the UC-Santa Cruz Banana Slugs club team, you know you have struck the jackpot.

2. Ironman Hawaii
Athletes are ready to let loose after their key A race of the year. The evening begins with the Awards Ceremony where the wine and beer flow freely and potentially carries on late into the evening with a smorgasbord of options along Alii Drive, ultimately ending on the dance floor at Lulu's where you can expect to rub sweaty elbows with your favorite pro.

1. Xterra Maui
This organized, costume party has gained a reputation as the premier party of the year. Held the night after the race, pros and age groupers alike are willing to let their bodies take a pounding during the race and then let loose later that same night. This party coincides with Halloween making costumes a must-have in which athletes pre-meditate their digs months in advance.
Posted by Recovox at 11:42 AM