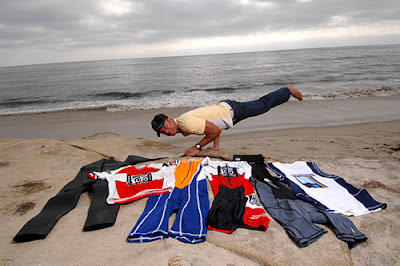 In triathlon's short history, the seven years between 1984 and 1990 are multisport's version of the industrial revolution. It was then that the sport and its associated gear transformed from three separate activities into a unified pursuit with its own specialized equipment.

Recently IT.com talked to all three of these influential men to find out what put their innovative wheels in motion. In part three of the three-part series Emilio De Soto talks about year one in business and recalls sleeping in his warehouse.


InsideTri.com: Walk us through the timeline during the early days of De Soto Sports.

Emilio De Soto: If you count on two hands, we might be considered one of first companies. There were some before us taking a crack at triathlon apparel. But when I started my company what I was noticing is that these companies were calling themselves tri clothing companies, but all they were doing is making swimming, cycling and running apparel.

We got into the business after looking at what a company called Forté was doing in early 1980s. They invented what is now known as the tri short - a bike short with some kind of elastic waist that had a pad that wasn't as big as a cycling pad, so that you could swim, bike and run in it.
When I started De Soto in 1990, if you look at photos, people were racing in Speedos with these skimpy little tops. I wasn't a fan of that look. So instead of swim, bike and run clothing, we started making triathlon racing and training clothing. That was the simplicity behind the start of the business.
IT.com: Talk about those early days. You ran a pretty lean operation.

Emilio De Soto: In the beginning we shared a building in Santa Ana, California with Quintana Roo. [QR founder] Dan Empfield was one of my company's first investors, which meant free warehouse space for De Soto. That meant a shelving unit that was not only my warehouse space, but also occasionally my bed.

IT.com: So you were pretty much a company of one?
Emilio De Soto: Well there were people to answer phones, but most of those calls eventually just got passed on to me. So yeah, it was just me for the first nine months. The QR people helped with shipping, but order processing and all that was done by me.
IT.com: How did you handle manufacturing in those early days?

Emilio De Soto: When we first started in Santa Ana, I was designing garments and cutting fabric, then taking it to a couple sewing contractors nearby. Today, all of it is either done in-house or by nearby contractors. We are fully made in the USA except our wetsuits and backpacks. We also do custom wetsuits, alterations and repairs. We repair more wetsuits from other companies than our own, and we make good money doing that.
IT.com: How did you handle sales in the formative years?
Emilio De Soto: We took the approach to go out and sell right to consumer at races. My first summer I was working during the week, then going to races on the weekends and after I did my race, I was popping open the trunk of my Honda CRX and selling product out of the back.
IT.com: What has made De Soto Sports so successful?

Emilio De Soto: First off, Forté invented the tri suit and short. He was making them in the early '80s. But they didn't catch on so you were still seeing people compete in everything from swim shorts to run shorts. What I did was take his initial concepts and refine them to a point where people would buy them over other options.

His tri short had a one-piece pad, but it was made of real leather, not synthetics. So you had to rub chamois butter on it after washing or it got crusty. I looked at the concept and said he's close, but it's 1990 not 1983. We have synthetic fabrics that will be comfortable and stretch in every direction of the short.

IT.com: How is your product line evolving today?

Emilio De Soto: We continue to evolve in simple ways. I go downstairs and tweak sewing machines to create stitches that have never existed before. I design my own fabrics for the garments we use. We are no longer just a clothing company. We are a sewing machine alteration company that makes new stitches, and we make our own fabrics.
IT.com: De Soto is one of the few companies that focus on two-piece wetsuits. Why?

Emilio De Soto: That was something Dan [Empfield] and I kind of came up with together. We both had ideas. His was that a two-piece was the only way to make a wetsuit without a zipper. I thought that with or without zipper, it would allow your upper body to move more freely from your lower body and be a lot more comfortable doing so.
On top of that, we both agreed that most companies put floatation in the torso. But we believed the floatation needs to be in the legs and hips because that's the densest part of your body. Your torso needs flexibility, but your torso is not as dense as you are from the hips down. Every swim coach says if you can get your hips up and swim in that downhill position you will swim a lot faster.

IT.com: What do you have in the works right now?

Emilio De Soto: We have lots of cool stuff for 2008. We've just recently gotten involved in making custom team apparel. We also are just finishing up 2008 product designs. We made some funky things like arm coolers. They keep the sun off your arms and have a ventilating effect based on fabric design. We've sold more arm coolers in first 6 months than arm warmers in previous 15 years. I have so many ideas, but I don't have enough time to execute them all. I would rather it be that way then to have time and no ideas.
Posted by Recovox at 3:44 PM

This seems to be a great site for Portable Pools, Plastic Pools, Full Wetsuits, Water Footwear, Queen Airbed With Pump.I had been relying on http://www.outdoorleisuredirect.co.uk earlier and they too offered good stuff.