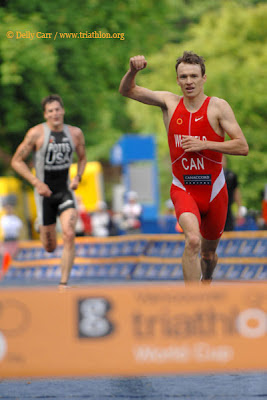 Canada’s triathlon golden boy Simon Whitfield has just elated the hometown crowds by winning the 2007 Vancouver BG Triathlon World Cup in a time of 1 hour 49 minutes and 16 seconds. Only 2 seconds behind was American powerhouse Andy Potts in seconds place with his team-mate Matt Reed in third another 53 seconds back.

Wetsuits would be worn in a chilly 1,500 metre swim in the 16 degree Celsius waters of English Bay. Seven men would exit the water together including all three eventual medalists, Paul Tichelaar and Colin Jenkins of Canada, Alexander Brukhankov of Russia and Brian Fleischmann of the United States.

Many athletes agree that seven is the magic number on the bike, being the perfect size to work well together, spreading the load without becoming cumbersome. This was apparent today as this group managed to increase their lead over the 40 kilometre course to over two minutes.

Immediately on the run, the former Olympic and Commonwealth champion, Whitfield, would blast away from the rest of the group to the fastest run of the day, followed only by Potts. With only 400metres to go, Whitfield would pull out his famous sixth gear to accelerate away from the American to win his eighth career world cup gold. With eight world cup gold medals in his cabinet, Whitfield has the most wins of any active world cup man on the circuit.

In fourth and fifth position was Brukhankov and fellow Canadian Tichelaar, respectively.

I need to to thank you for this great read!! I definitely loved every bit of it.
Blue Cookies Strain details I have got you bookmarked to look at new stuff you .