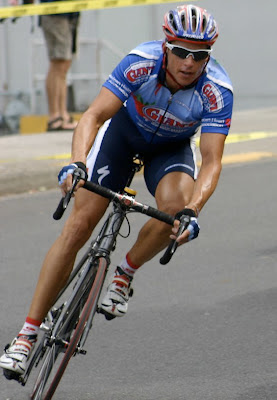 The last couple weeks has been a great cycling block of training. In that I have done 2 one day road races and a week long stage race. The first event was the Mount Hamilton Road Race held on Sunday May 27th. It was a great opener to the week ahead. The race started in San Jose and climbed 4,500 feet in 20 miles to the top. Heading up the mountain the pace was fast dropping some riders off the back. Once we got close to the top there were some hard attacks as some people wanted to go for the KOM. Over the top there were about 5 of us that went over together. On the descent down the back side a small group caught back up and the pace was picked up again. As we made it through the halfway point there was a couple more climbs and some more attacks came. Again, about 5 of us made it off the front. @ guys broke away by them selves and I found myself trying to bridge across to the by myself for the next 45 minutes. With no luck I waited for the chase group, and I decided to sit in and save some energy for the week long stage race I was heading up to the next day. I ended up finishing 8th and was happy with that.

The next day I was off to Oregon for the week long Stage Race in Mt. Hood. 6 days of riding was ahead with over 400 miles of riding and climbing over 31,000 ft. To make it even a better week Hood River was having a heat wave of over 90 degrees everyday we were there. I ended up racing well through out the week. Learning a lot about road racing and pushing myself as much as I could. It seemed like everyday I was inpatient and trying to get in a breakaway and attacking where ever I could. I learned that racing a stage race is more about conserving you energy as much as possible and waiting till the end everyday. Well, you all know my style is trying to get to the front and working hard, so it seemed that was on the training calendar for me everyday. I ended the week with a 7th place finish in the overall GC and finished 5th on Stage 4, which was a Time Trial of almost 20 miles. Al in all it was a great week with some serious efforts and tempo that I wouldn’t have been able to do on my own. I also ended up doing about 3 transition runs during the week which added some great fitness for me.

After getting home needless to say I was a bit tired. I ended up getting some great naps in during the days following. I got back in the pool swimming, which I was unable to while up in Oregon. My swimming came back quick and actually my tempo swimming as improved. I think from all that threshold work racing it transfered over to the swim. I did a couple easy to moderate days of riding the following week and then I decided to do Pescadero Road race.

Pescadero is near the coast next to Half Moon Bay. The race is 103 miles and has about 12 good climbs. I was not sure how I was going to perform coming off the week of racing in Oregon, but my coach Lance Watson, wanted to keep my fitness and threshold going well. The race started fast as we hit the first climb of the day. It took only through the first 2 climbs for a break to get away, which had one of my team mates in it. So we let them roll off and it was up for the other riders to bring it back. It took about the next 40 miles to get close to them. As always I was keen to jump on anyone that was attacking or trying to bridge across to the break. I got in a small group that was working well to catch the break. As we went up one of the long climbs I attacked and went solo to get across. Once I got the break I kept going with one other. It didn’t last long and on the descent a large group caught us. The pace kept going hard until we hit a long climb with about 30 miles to go. I attacked again and was off the front by myself. As we got close to the top another rider, Barry Wicks, Jumped and bridged across to me. We had maybe 20 or 30 seconds on the group going over the top. I encouraged him to work hard with me on the descent and I had a feeling that we could stay away if we could make it to the bottom of the climb with a gap. We did and we ended up riding together for the last 25 miles. Coming up to the finishing climb about 5 miles to go I got a rear flat. What a huge bummer. I had no choice but just sit on Barry and hang on to the finish. I was able to hang with him to the finish and he ended up taking the win, and I ended up finishing 2nd.

Another great day of training for me. the day ended up being about 120 miles of riding and I finished it off with a transition run. I felt great and I am very excited for the rest of the season. I am looking forward to racing a couple Olympic distance races and a couple Ironman 70.3 races in the next couple of months in preparation for Ironman Hawaii. Things are going well and now it is all about timing and keep building my fitness for the next couple months going into the World Championships.
Posted by Recovox at 3:11 PM