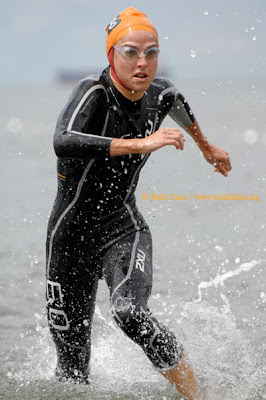 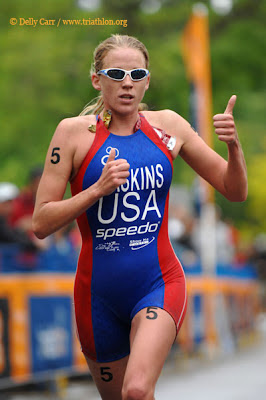 Samantha Warriner of New Zealand has just won the 2007 Vancouver BG Triathlon World Cup in the official test event for the 2008 triathlon world championships, with one of the fastest women’s 10-kilometre run splits the sport has seen. Warriner would run her way back from an untypical slow swim and eventual 90 second deficit off the bike with a blistering 33:16 10km split. Sarah Haskins of the United States would finish in second place 36 seconds back for the first world cup podium of her young career. Rounding out the medals would be current Under23 world champion Erin Densham of Australia, only 10 seconds back.

Trying conditions would greet the 40 athletes with wind and heavy rain making the already difficult course gruelling at times with a number of athletes withdrawing, succumbing to the slippery and cold conditions.

After the opening 1,500 metre swim it was the American duo of Sarah Haskins and Sara McLarty to emerge first and head out on the 8-lap 40-kilometre bike course. The two worked well together early into the bike to open a 30 second gap on the chase group of 16.

The two young women would continue to put time into the chase group of top contenders including; Warriner, Densham, Joelle Franzmann of Germany, Lauren Groves of Canada and Elizabeth May of Luxembourg. At the end of the 8-lap bike, Haskins and McLarty would be 97 seconds ahead of the Warriner and the others.

Out on the run, the determined Warriner loped off 30 seconds of Haskin’s lead over the first of three laps. It would be a steady process from there as Warriner would first reel in McLarty and then set her sights on Haskins and her fourth world cup victory of her career. The slowing Haskins would hang on to second place, however, with a quickly approaching Densham nipping at her heels.