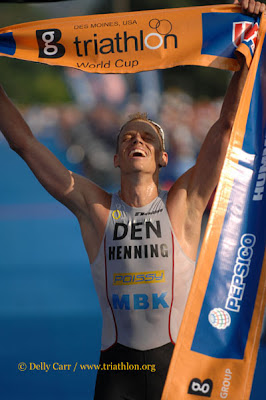 Rasmus Henning of Denmark received the best Father’s Day gift of his young parenting life today, winning the 2007 Des Moines BG Triathlon World Cup and taking home the biggest payday in triathlon history. Father of two, Henning’s time of 1 hour 50 minutes and 3 seconds was good enough to claim the US$200,000 first place prize cheque and US$65,000 prize pack that went with it. Olympic silver medalist Bevan Docherty of New Zealand crossed the line in second position, 30 seconds behind. Rounding out the top three was world number one ranked Javier Gomez of Spain, a further 12 seconds back.

The record-breaking prize purse was thanks to the generous work of presenting sponsor, American grocer Hy-Vee.

No one would be able to break away over the opening 1,500 metre swim with 41 men exiting the water within 30 seconds of each other. This large group contained all the top names and would stay together over the opening two laps of the 40-kilometre bike segment. It would be American Matt Reed to stir things up and take off the front, making a 30 seconds gap over the next two laps and getting some quality airtime on the American broadcaster NBC. The tall American would not get far however as a group of six, including Henning, managed to catch on to the former Kiwi and enter second transition a minute ahead of the chase group.

From here it was Henning and former Olympic gold medalist and recent Vancouver world cup winner Simon Whitfield of Canada to take to the front and begin to run away with the race. Henning would stay at the front as a faltering Whitfield was passed by first Docherty, Gomez, current world champion Tim Don of Great Britain and Greg Bennett of Australia in the closing metres.

Don and Bennett would finish in fourth and fifth place, respectively.