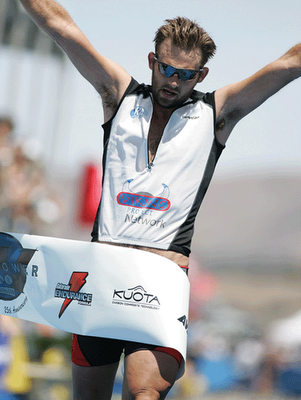 The Wildflower triathlon holds a special place for me. It was the first race I did in the US and also my first pro race in the USA in 2001. It was one of the races that always caught my attention reading about it in the triathlon magazines so I thought it would be a pretty cool to get over here and try it out. Back then I had yet to make many of the mistakes I’ve made since then and decided that since I was in a good training climate might as well get some good workouts in during race week. Not surprisingly I didn’t have a very good race then and every year I’ve been back there has always been something that kept me from having a good race with everything from a broken stem to injuries.

This year I wasn’t completely sure how I’d do either since the training previously this season had been less than stellar. But I finally did get 3 weeks of good training at altitude up in Xantusia in preparation for the race so if everything went my way I still thought I could have a good race.

The swim was not one of the best I’ve had as I got caught up in the start and had to go around the main group to try and catch the leaders. I did get up to the lead group but once I got there the last two guys in the group dropped off and I didn’t have enough energy to bridge the gap once again. It wasn’t a big deal though since we only lost about 20s on the swim leaders. Out on the bike I took it really easy and carefully the first 2miles because of the bad road conditions. I was also pacing carefully up the first steep climb lost some time to the guys ahead there actually. Once out of the park and on to the more rolling terrain I got into the lead and opened up a bit of a gap using my Ergomo to pace myself. And then finally approaching the main climb on the course with about 20km to go I increased the effort a bit and opened up my lead more and got in to the run with about a 5min gap to 2nd place.

Running is obviously not my strong point as most people who have seen me run knows and this is a pretty tough run course as well. Lost a lot of time on the downhill sections on the trails during the first part of the run and by mile 9 Australian Chris Legh caught me. He’s one of the best at this distance and a great runner so I’d say in probably 9999 times out of 10000 he’d beat me in a situation like this and at this stage I just hoped to hang on to 2nd place. But much to my surprise I caught up and got a slight gap on him on the next hill though he caught back up to me again soon after on the downhill/flat part. With one mile to go there is another short uphill and I once again got a gap and from there on there is a big downhill section before the finish and I was running scared the whole way to the line but got away with very narrow win. So a good race for me on a tough day with strong winds on the bike and run which slowed things down a bit.